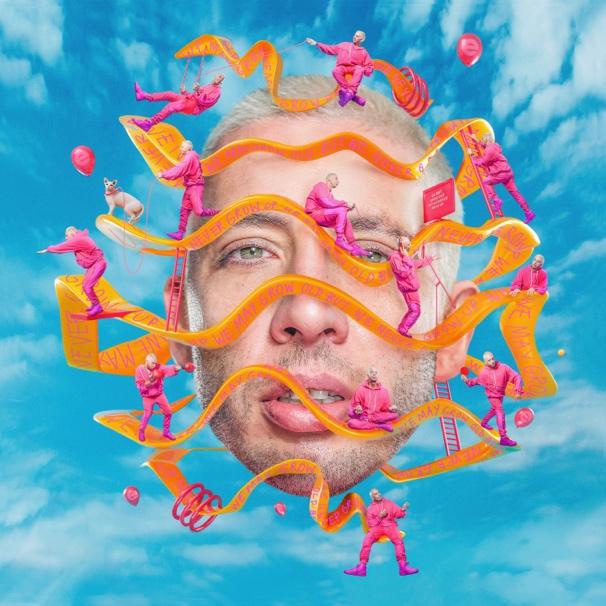 Maintaining years of momentum with chart topping singles, career defining festival sets, sold out tours and multiple platinum records, Example’s 8th album We May Grow Old But We Never Grow Up reflects on the whirlwind two decades of his success as the project drops in time for his 40th birthday. Embodying his youthful nature whilst exploring his roots he delivers fresh hits suited for new fans and his decades worth of loyal listeners.

With unique foundations in place, the bulk of the project came to life in his second home, Brisbane Australia, with songwriter Penny Ivy and highly regarded producer James Angus (Tkay Maidza, Last Dinosaurs, The Veronicas), crafting a cohesive album that combines his UK roots with a contemporary sheen.

A momentous journey that travels through multiple genres that he has become renowned in, intro and album title track We May Grow Old But We Never Grow Up is a rendition from Example, showcasing his timeless talent and lyrical flow. Filled with a Peter Pan spirit; tracks like Never Let You Down are youthful musings on blurry nights on the town, while lead single Every Single Time was inspired by the nostalgic moments that Example’s music has sound tracked. He shares, “Fans always say to me, ‘Oh my God, your song reminds me of when I lost my virginity, your song reminds me of the time I took my first pill, your song reminds me of the first time I kissed my wife.”

Meanwhile, tracks like Dot Dot Dot with UK and Australian rap talent Local and Nerve as well as fiery verses from UK’s esteemed grime artist JME and Westneat on Egyptian Cotton demonstrate the core grime, drill and hip-hop scenes Example has become immersed in from the very beginning. Elsewhere, the album nods to crossover dance spectrums with tracks like Best Laid Plans with Penny Ivy, Faith with the legendary Majestic, r&b infused I’m About (Only Got Today) and Won’t Forget You alongside dance titans Tommy Trash and Window Kid, weaving between house, garage and pop.

Ahead of the album following his recent return to the UK, Example sold over 25,000 tickets across his 14 date headline tour continuing his legacy whilst attracting new fans both young and old, adding to his ever growing loyal following cultivated throughout his prestigious career. More in demand than ever, he has 40 festival shows this summer including his own “Try This For Example” branded arena at Creamfields, a residency at Ibiza Rocks as well as shows at Electric Woodlands, TRNSMT, Benicassim, Standon Calling, Splendour, Latitude, Bestival and more.

Example – We May Grow Old But We Never Grow Up is out now via BMG.