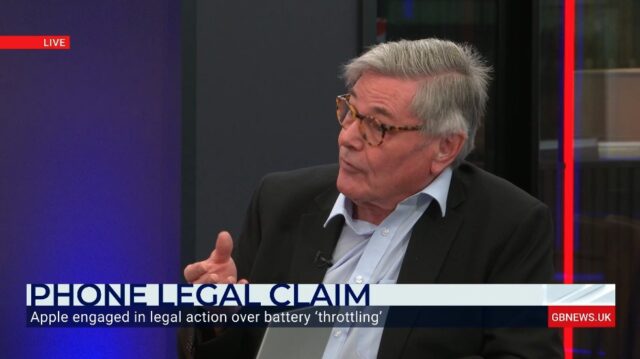 APPLE attempted to cover-up a mistake with iPhone batteries by reducing the performance of its devices, according to a campaigner behind a class action court case against the tech behemoth.

Justin Gutmann claimed Apple took the decision after it discovered that the batteries in its devices were not fully compatible with its operating software.

He told GB News: “When they brought out the versions 6, 7, 8 and 9, the battery didn’t work as well as
should have done to work the new software that these funds required.

“And when this became clear they downloaded some updates, which everybody gets on their mobile phones all the time.

“But they didn’t say exactly what this software was going to do. And what it did was it slowed the performance of the phone down,” he added.

“The consequence of that is if you’re scrolling through, if you’re looking at an app or Facebook, whatever, it wouldn’t work as quickly as it should have done.”

Mr Gutmann, who is leading a class action court case against Apple on behalf of millions of British iPhone users, explained the situation in an interview during Breakfast with Anne and Stephen on GB News.

“On the software, it damped it down, throttled it, so it didn’t perform as it should have done for the new phones. That’s the problem.”

“I don’t understand why they would do it. And as you said, they have denied that they did anything deliberately.

“But the fact remains and technical experts around the world and my technical expert has shown that the effect was as we said it slowed the phone down and made it less effective.”