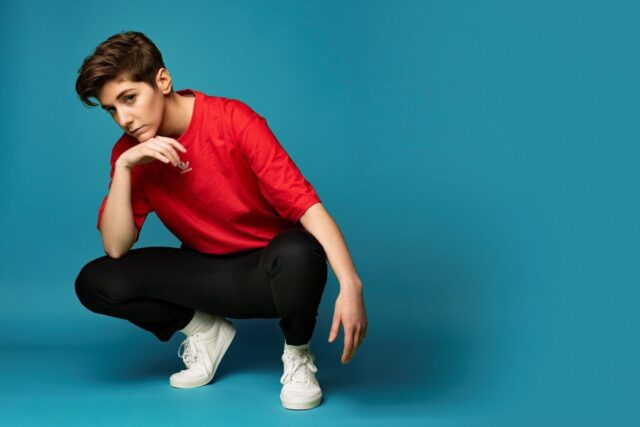 Award-winning, comedian Sarah Keyworth returns to Edinburgh Fringe Festival with her new show ‘Lost Boy’, diving into her homemade recipe on how to find laughter when you think you’ve lost it all. In 2020, Sarah Keyworth wrote a comedy show called ‘Lil’ Keys: Big Jokes’, for many reasons, some more global than others, this show never came to light. Instead, she decided to create a show about loss… Loss of faith, loss of innocence and crucially the loss of a very important friend. ‘Lost Boy’ is a moving hour, sharing hilarious and insightful anecdotes all bringing humour into a mortal tragedy, as Sarah explores her journey to rediscovering silly.

Keyworth has fast become one of UK comedy’s brightest new talents. In 2018, Sarah took her debut hour, ‘Dark Horse’, to the Edinburgh Fringe Festival where the show saw huge critical success, receiving four to five-star reviews from The Herald, Telegraph, Scotsman, and many more. The show also received a Herald Angel Award, a Pleasance Theatre Award, and a nomination for Best Newcomer in the Edinburgh Comedy Awards.

After her run, Sarah took Dark Horse on tour around the UK and then to Australia, where she performed at the Melbourne International Comedy Festival, again to widespread critical acclaim. While in Australia, she also performed stand-up on ABC as part of the prestigious Melbourne Comedy Festival Opening Night Gala. In 2021 Sarah reprised Dark Horse for a special recording for Amazon Prime Video and Soho Theatre, which is now available on the platform. Her second Edinburgh show, Pacific, was also a huge hit with audiences and critics alike, selling out its entire run. Sarah took the show on tour in 2020, selling out dates around the UK.

Sarah’s broadcasting career is also firmly on the up. She has appeared on BBC2’s Live at the Apollo and Mock The Week, Comedy Central UK’s Roast Battle, ITV2’S Stand Up Sketch Show and performed stand-up on BBC Radio 4 institution ‘The Now Show’. Sarah wrote and performed her own series, ‘Are You A Boy Or A Girl’, for BBC Radio 4 and co-hosted hit relationship podcast ‘You’ll Do’ for BBC Sounds.