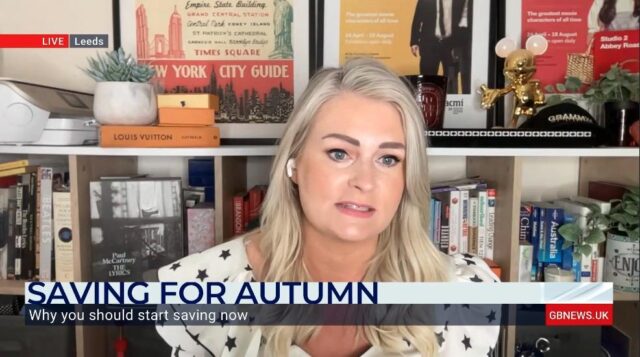 Kate Hardcastle told GB News: “What I thought was really interesting in the news of late was actually we have what we call the big four, the supermarkets where we do most of our shopping, and it could well be that for the first time Aldi will actually overtake Morrisons.There are a lot of people using Aldi and Lidl brands to make sure they get their bargains.”

Speaking in an interview during Breakfast with Eamonn Holmes and Isabel Webster on GB News, Kate said people should manage their summer spending to prepare for a welter of cost increases in the autumn.

She said one simple money saving tip is to try to have a “no spend weekend” every three or four weeks.

“It’s actually easier than it sounds,” she said. “We’ve got a lot of free events going on through summer. Take a look online and you’ll see a lot of things going on getting the kids involved as well.

“We use Monopoly money at home to try and explain to the children the idea of getting into the idea that there’s out doesn’t have to be those big costly things where it might be included in a theme park admissions and we’d have fuel costs really going up as well.

“So I think it’s very much about trying to get into the discipline of budgeting to actually when it does get to you not really feeling that you’re going from one extreme to the other but it might be a little bit more balanced.”

Ms Hardcastle said that while people may want to get out and enjoy themselves after the Covid lockdowns they should ensure that they budget for the additional spending.

She said: “I’m out there and seeing exactly those people who feel that they’ve had two years without being able to go and do the things that they love.

“All I’m saying is we know that we’ve got a tough autumn ahead, particularly the fuel bills which are going to kick in an even stronger way, it is going to be more challenging as we see more food inflation on the cards.

“I think it’s probably a good idea to start getting into the habit of making sure you know how to budget.”