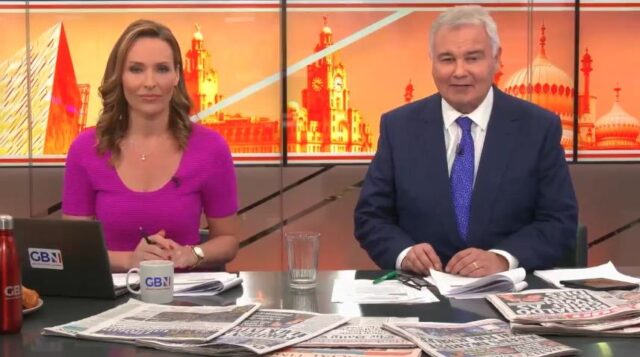 TV host Eamonn Holmes has revealed some of the ridiculous demands made by celebrities appearing on his programmes – including one actor who wanted all plastic items removed from his dressing room.

Eamonn, speaking on Breakfast with Eamonn and Isabel on GB News this morning, said: “Anyone who has ever interviewed any minor Netflix actor or actress and they come to you, they come with an entourage.

Eamonn said that he has seen celebrities make some odd demands on shows he has hosted.

“I’ve had someone who refused to sit on a couch. There’s also an actor who arrived and said he’s an ambassador for the seas therefore there can be no plastic in his dressing room.

“And stupidly the presenter, the researchers are trying clear out his dressing room . I said “don’t give him a dressing room, let’s see what he does when we put him in the green room like everybody else.”

Liam has revealed that he needs new hips but is refusing to have the operation and said he would prefer to remain in pain in a wheelchair.

Eamonn said: “Liam Gallagher is suffering hip pain so bad, he needs to have his joints replaced – but is refusing to do so because of the ‘stigma’ that comes with it.

“Well, Liam, I’ve been there, done that and got the T-shirt. I refused that same operation for three decades, believing that grimacing through the agony was far less embarrassing than having surgery associated with 75-year-olds.

“Honestly? Waiting was the worst decision I ever made.

“After having both of mine replaced seven years ago, aged 55, I haven’t had a single regret: in fact, it’s been life-changing.”

He added: “People who don’t suffer from this have no idea how chronic the pain is; the sleepless nights or not being able to drive, let alone do anything more physically active. If it hasn’t come to your door, you should be downright thankful.

“For sufferers, though, if the options are mockery or being pain-free, the latter wins out every time.”

He said that compared notes on joint troubles with legendary broadcaster Terry Wogan and went on a trip to Dublin just before his operation.

“Whilst on that family break, Terry Wogan died, so I spent most of it fielding media requests for memories of him,” he said.

“It wasn’t the most relaxing day, but it did make me think of all our orthopaedic chats – Terry had knee trouble, while mine was hip-based – and we’d always spend a fair bit of time discussing surgeons and hospitals.”