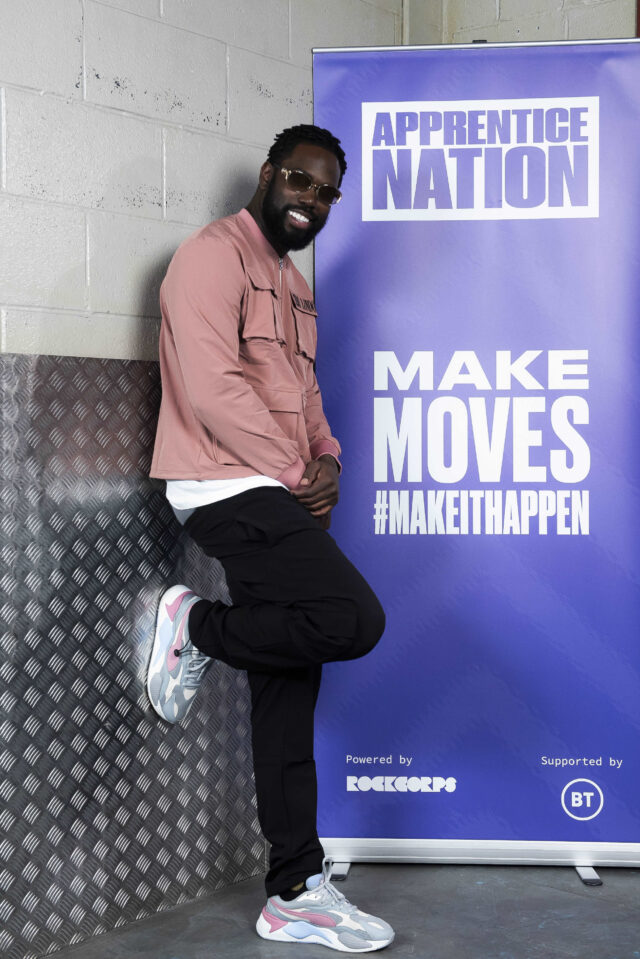 Apprentice Nation, supported by BT, today announces that Ghetts, Young T and Bugsey, Ray BLK and IAMDDB will perform at their concert on April 22 to launch their spring programme. With the live show kicking-off the six-week webinar series, which features career advice for the modern world, from artists and music executives, industry leaders and even real-life apprentices.

Unlike anything else on the training scene, Apprentice Nation’s has been built as a gamified career training platform that taps into the power of music to engage and inspire 16 – 24 year olds, particularly those from traditionally underrepresented backgrounds, to discover career pathways and job opportunities through on demand videos, mentor sessions, webinars and Q&A sessions. Topics covered include wellbeing and mindfulness, diversity & inclusion, and personal branding, as well as core skills for life and myth-busting around career paths.

The free, accessible content, delivered by the top UK artists, alongside industry leaders and young people, gives participants the opportunity to earn credits whilst they learn and exchange them for exclusive rewards provided by partner BT, such as England Football Shirts, Beats by Dre headphones, and even the exclusive chance to hang out online with one of the artists from the live show. The more content participants watch, the more credits they earn and the more rewards they can claim. Young people from all four nations have excelled through the programme; over 2,000 courses completed in 2020 and 75% of participants reported an increase in confidence for themselves and their future and.

Everyone has been hit hard this year but particularly the 16 – 24 age group. According to research with BT, three in ten (30%) are now more likely to consider apprenticeships in light of the COVID-19 pandemic. The programme has been created with music at its heart, serving as a vehicle to reach out to them, even in the darkest of times, and highlight a path they may have not yet considered. According to the research, over two thirds (67%) agree that apprenticeships are a good entry point to get your foot on the career ladder.

Apprentice Nation flips the traditional training methods on its head, working with artists who can speak authentically to their audience, harnessing the power of their music and message to engage with young people, especially those from underrepresented backgrounds. Webinars, featuring the artists from the live show, include:

Power Up – Wellbeing and Awareness

Skills For Life – Get Work Ready

Unlock Your Potential – Entrepreneurialism and Self Promotion

Ghetts, says: “In a time where individuality is underrated, I feel it’s important to encourage young people to be them selves, after all they are next in line to carry the responsibility of changing the world. I can’t wait to perform for apprentice nation on the 22nd of April I believe in being fearless and seizing every opportunity that’s for you.”

Bugsey of Young T and Bugsey says: “We’ve got to keep learning and also celebrate the wins on the journey. That’s why we’re joining Apprentice Nation; to celebrate the future and the opportunities that lie ahead. It’s been a difficult year for everyone and we’re happy we can show others that we can still have a good time and keep moving forwards.”

Ray BLK, says: “I’m beyond excited to be working with Apprentice Nation to raise awareness of the diverse paths that anyone, no matter their background or gender, can access today. I’ve felt the anxiety and pressure that comes with standing up and representing my race and my gender on stage. It pushed me to be my best and I want other young women, especially those from underrepresented backgrounds to have those opportunities and not feel afraid. I’m proud to be working to level the playing field, not just in the music industry but in career and life journeys, whatever path people choose.”

IAMDDB, says: “I’m proud to be joining Apprentice Nation and supporting learning opportunities for everyone. It’s been tough for all this year but especially those from underrepresented backgrounds who lack visibility and positive role models in the workforce. It’s really important that people have the confidence and belief to put themselves out there. Apprentice Nation helps people from all communities and backgrounds build the skills to do this. I’m looking forward to sharing my music, sharing the love and supporting people through whatever challenging times they’re going through. Positive vibes to lift others is what I’m all about; and to never stop learning.”

Previous Apprentice Nation shows have engaged thousands of young people from across the UK and supported them to build skills for work and life. Produced by RockCorps and Multiverse, the platform aims to highlight alternatives to university, such as apprenticeships, that young people might not have otherwise considered. In fact, the same research of 16-24-year olds found, four in ten (42%) of young people would consider an apprenticeship if they could find one in an industry they liked.

Amie Nichol, apprentice at BT, says: “I’m six months into my BT apprenticeship and by the end I’ll have the same Business Management degree I would have got if I’d stayed at university, but without the financial pressures. I’m earning and I’m learning and in many ways, I feel one step ahead of my friends who chose to go to university. It just wasn’t for me, but at the time I enrolled it felt like my only option. After a month I made a hard decision to leave and I just went back to work full time in hospitality. I suppose I did feel a bit lost and my parents were worried about what I’d do next in my career. I used to think BT was just a broadband company, it would never have occurred to me I could be doing what I’ve always wanted to do with them via an apprenticeship.”

Stephen Greene CBE, CEO RockCorps & Producer of Apprentice Nation, says: “Visibility is mission critical. A Our premise is that young people need to see it to believe it; pics or it didn’t happen. Apprentice Nation sits at the cross-section of entertainment and education, working with music artists, experts and partners to showcase opportunities available to young people today and giving youth a chance to explore through accessible formats that they will both seek out and enjoy. We are thrilled that Ghetts, IMDDB, Ray BLK are joining us this spring; entertaining and inspiring youth after such a challenging year.”

Marc Allera, CEO of BT’s Consumer Division, says: “Apprentice Nation is an incredibly powerful programme which uses music to actively engage young people from a broad range of backgrounds and gets them excited about a career path that they might never have considered. Apprenticeships aren’t ‘one size fits all’, and our apprentices play an essential role in our business. There is something for everyone and from day one, you’re being paid to do doing a valuable job, taking on responsibility, learning new skills and discovering new perspective. What’s not to love?”

Euan Blair, Founder and CEO, Multiverse says: “A big obstacle to an even greater uptake of apprenticeships right now is awareness. Many young people remain unaware that an apprenticeship could offer them an excellent route into a career in tech and professional services. That’s why we co-founded Apprentice Nation: through their outreach activity they’ll empower more young people to make great decisions about their future. This is an important part of how we ensure apprenticeships are rightly viewed as an outstanding alternative to university.”