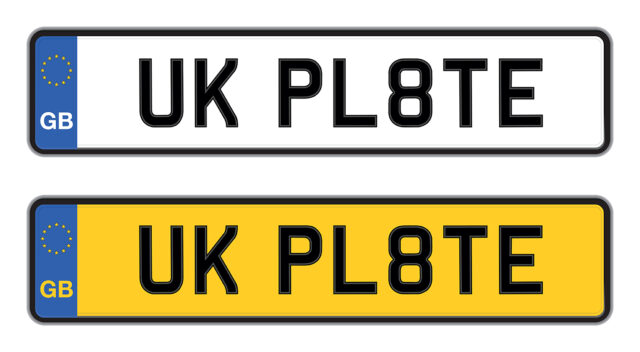 Fun fact: The first four-wheeled petrol-driven automobile in Britain was built in Walthamstow by Frederick Bremer in 1892. It wasn’t until the turn of the century they became common though, and in 1904, there were 23,000 cars on Britain’s roads.

Obviously a system needed to be devised to uniquely identify individual automobiles and their owners, so the Motor Car Act was passed in 1903. It became compulsory for every car to be registered with a number plate.

Plates from bygone decades can cost incredible sums of money, either for nostalgia or their smaller styles, such as containing only one letter and a couple of numbers. Many famous celebrities or people of importance own incredibly expensive historical or vanity plates. Did you know, for example, that Queen Elizabeth II owns the license plate “A 7”?

Buying a personalised license plate from the DVLA involves a bit of paperwork and lengthy waiting time to receive your new plate, but purchasing either from private sellers or brokers cuts the time significantly. The company linked above, for example, is able to send your new plate in 7 working days, compared to waiting 4 – 6 weeks from the DVLA.

In any case, let’s examine how the plate system in the UK has changed over the century.

These plates had nothing to denote the year of issue, and it’s astounding that the system lasted for 60 years. The marks used a local council identifier code of 3 letters, and a random number, such as ABC 123.

The first license plate issued in London was simply “A1”, belonging to Earl Russell. He actually camped out an entire night to obtain it, and the license plate number A1 has survived through history, passing through owners via private sales for unknown amounts of money, estimated to be worth tens of millions of pounds.

Interesting fact, as of September 2020, the A1 plate is registered to a black Mini Cooper, purportedly belonging to the Prince of Brunei.

In 1920, the Roads Act was passed that altered a few things about the number plate system. Previously it was possible to have two registers, one for automobiles and one for motorcycles, so it was possible for a car and a motorcycle to have the same plates in the same area. Obviously this could create some confusion, so the 1920 Roads Act ensured that there could only be one register for all vehicles.

Dateless registration plates from this era are highly sought after, particularly short combinations like A 12, or O 11, the latter being worth nearly a hundred thousand pounds.

In 1963, a number of local councils had exhausted the number of plate registrations available, even after adding extra digits and reversing possible combinations.

Thus, the Suffix system was introduced, which added a letter indicating the year of registration to the end of the plate. This gave plates in 1963 a format such as AAA 111A, 1964 plates AAA 111B, and so on.

The administration of this system had turned into a massive burden for local councils, as registration was all done manually and locally, and by this point in time there were hundreds of thousands of automobiles on the road.

Police checks on vehicle records were also very time consuming and required a lot of labour, as well as delays on registrations. So aside from the revamp of the format system, the government began planning a new system using modern technology to create a centralised system, which took nine years in planning.

In this system, letters indicating the year were reversed to be at the beginning of the registration mark, which doubled the lifespan of the number plate system. The system’s format worked like this:

This system was used until the end of August 2001, and interestingly, the letters I, O, U, and Z were never issued as Prefix letters, and Q was used only when the age or origin of a vehicle could not be identified.

This system only lasted 20 years before all possible combinations were exhausted, and so the current style needed to be devised.

The current system uses this format:

This is because based on police evidence, witnesses of hit and run incidents are easier to remember registration marks that use letters first. And because people read from left to right, it made sense to put the local code at the beginning of the mark.

The current system is estimated to be future-proof until 2049, as it can handle up to 12.6 million new registrations every year.