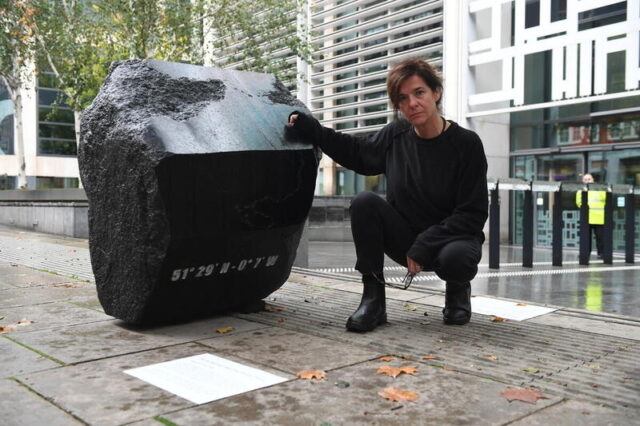 Artist Fiona Banner aka The Vanity Press has this morning delivered a 1.25 ton Full Stop sculpture to the doorstep of DEFRA. Local fishers have also come out in support of Greenpeace’s action at sea to protect the Dogger Bank.

Together with Greenpeace activists, Banner placed her sculpture in front of the DEFRA building in Westminster, London. The artist wanted to send a clear message to George Eustice, the Environment Secretary, calling out the Government’s failure to protect Britain’s most sensitive marine areas.

This sculpture, Klang, is one of a series of three. The remaining two Full Stop sculptures will be loaded onto the Greenpeace ship Esperanza this afternoon and deployed as an installation at sea in the Dogger Bank protected area. The art action completes a new area of almost 50 square miles developed by Greenpeace to be off-limits to destructive bottom trawling.

Campaigners and the artist have pledged to remove the artworks if the UK Government makes a credible commitment to immediately ban industrial fishing from the Dogger Bank and all of the UK’s offshore MPAs. Greenpeace investigators documented extensive illegal bottom trawling activity in the area during a fact finding mission in summer 2020. A dossier documenting this activity is available here.

Adrian Noble, a 53 year old fisher based in Whitby, said:
“Over the last 10 years bottom trawlers have decimated the crab and lobster grounds off Whitby, destroying our crab pots with no regard for our living. These bottom trawlers have been targeting the Dogger Bank, killing everything in the process. Thank God Greenpeace has got involved, stopping these vandals from wrecking the sea by putting these boulders down. It is a protected area so these destructive industrial boats shouldn’t be there.”

Paul Lines, a 62 year old retired fisher, said:
“If our Government doesn’t act now to protect our oceans, then us fishers don’t have a future. Industrial fishing boats need to stop destroying the seabed to give sea creatures a chance. If they don’t, there will be nothing left in the sea for my children and their children to catch. Our coastal communities will be destroyed forever. There’s a lot of talk from the Government, but they aren’t doing anything about it. They need to act now, they can’t continue to let our oceans be destroyed any more.

Fiona Banner aka The Vanity Press has been creating sculptural Full Stops intermittently for the past 20 years, first exhibiting them at Tate Britain in 1997. These new works are sculpted from inert granite deposited across the North Sea – the stretch of land which once connected Britain to continental Europe thousands of years ago. The three sculptures form an ellipsis, and are styled in different vastly blown up fonts: Klang, Peanuts and Orator.

This action marks a turning point in the artist’s approach, raising discussion around where art happens and new possibilities for art-making in the post-pandemic age. Through this action Banner raises questions about the value of art. These sculptures, which might conventionally be seen in a rarefied, controlled art environment, are here being given to the natural environment. Their currency is not found within the normal art systems of exchange but rather in their potential to act as agents for change.

Fiona Banner aka The Vanity Press, said: “The pandemic has made us all more alert to the precariousness of nature and our ecology. At a time when words like ‘climate crisis’ and ‘emergency’ have been repeated to the point of diluting their urgency, I hope these new works and physical gestures carry a clear message and act as a calling card for the government to take action – a call to stop, reconsider and act.

“Language is the medium of treaties, argument, debate and agreement. The Full Stop sculptures are anti-texts. They are symbols of language on the precipice that are blown-up, made physical and confrontational. The Full Stops symbolise an impasse and crisis in language. They highlight the slipperiness of communication in a time of polarised rhetoric during which the term post-truth has become common vernacular. In this instance, the disjunction between what an marine protected area stands for and the reality of what is happening in those areas. It represents a rupture and demands a new approach.”