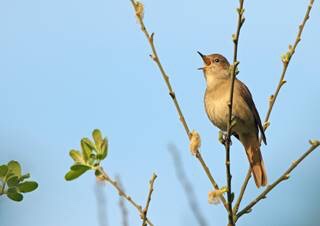 Nightingales are well documented throughout history for their enchanting vocal displays and rhythmic gymnastics. Their sound was so coveted, it ultimately led to their dramatic decline during the 19th century as the caged bird trade tried and failed to bring their sound into Victorian homes. Sadly, nightingales have continued to see a dramatic decline by up to 91% over the last two decades, with very few counties in the UK left with known populations of breeding nightingales each summer. Essex remains a stronghold for the species, with Essex Wildlife Trust’s Fingringhoe Wick Nature Discovery Park regularly seeing 40 breeding pairs.
Each year Essex Wildlife Trust hosts a series of ‘guided nightingale walks’ at their Fingringhoe Wick Nature Discovery Park on the outskirts of Colchester, however this year due to the lockdown and the closure of the reserve to the public, the conservation charity is instead bringing guided walks straight to people’s homes through a series of virtual walks.
With noise pollution levels considerably lower than other years, Essex Wildlife Trust are also calling on the public to help them identify other strongholds for nightingales in the county, by listening out for their spectacular song.
Emily McParland of the Essex Wildlife Trust says, “There is nothing quite like the song of the nightingale, it’s crescendos and array of songs leave you stunned – it’s mind-boggling how a bird of such size can produce such incredible sounds! With more people ‘tuning in’ to their local birdsong, we’re hoping to identify if there are any further nightingale territories around the county so we can continue to ensure the nightingale has a future here.”

Nightingales are most likely to be found in areas of thick vegetation such as dense hedgerows and scrub, and transitional habitats including coppiced woodland. Known for their skulking behaviour and non-descript pale brown looks, they are difficult to see but their famous song is of a high quality and features a fast succession of high, low and rich notes that few other species can match. Nightingales are one of the few birds to sing throughout the night as the male birds claim their territories and try to impress a mate.

Their song is at its most spectacular over the next month, before the males pair up and fall silent. To record if you have heard a nightingale singing, register it on Essex Wildlife Trust’s database here: www.essexwt.org.uk/protecting-wildlife/report-a-sighting/form