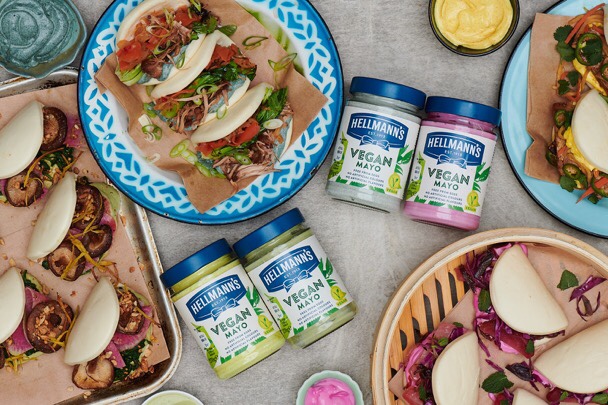 Is there anything more millennial than Vegan Mayo? There is now, as Hellmann’s has turned its great tasting Vegan Mayo into four deliciously pastel hues to celebrate Veganuary – including an on trend millennial pink version.

Hellmann’s has developed a series of plant-powered pastel mayo’s,which will star in indulgent £1.00 bao buns served from a pop-up food truck at BOXPARK Shoreditch this January. The new mayo’s have been created in a bid to remedy a typically gloomy and grey month, when money is at its tightest.

The limited-edition condiments retain Hellmann’s status as free from artificial colours and flavours and have been created by infusing Hellmann’s hugely popular Vegan Mayo with different plant-based ingredients. From beetroot (pink), to basil (green), spirulina (blue) and even turmeric (yellow) – the tasty mayonnaises are sure to appeal to a nation obsessed with photographing food as much as they are eating it.

Vegans, vegetarians, flexitarians and anyone who likes a colourful lunch will be able to get their hands on the limited-edition mayo filled buns at the Hellmann’s Vegan Rain-Bao Truck, located at BOXPARK in Shoreditchon Friday 17th and Saturday 18th January 2020. All proceeds from the bao-tiful buns will be donated directly to Veganuary – a charity that aims to create a kinder world and healthier planet through educating people about the benefits of a vegan diet.

Rhiannon Lines, Brand Manager at Hellmann’s, said:
“We’re excited to give Hellmann’s Vegan Mayo a rainbow-hued makeover in honour of Veganuary. The bao buns taste as good as they look, and we can’t wait for people to get their hands on them.”

“We’ll also track sales in order to identify Londoners favourite flavour bao and our ‘star jar’, in the hopes to bring back the special-edition jar in the not too distant future.”