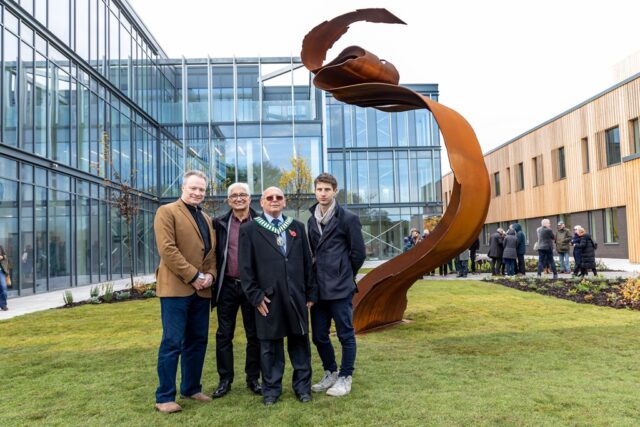 A public sculpture which is a centrepiece of a new development in Harlow for innovation, science and technology has been unveiled.

The sculpture by Nick Hornby, Twofold, has been unveiled in the Harlow Science Park. Twofold is the 100th piece in Harlow’s public sculpture collection. Its unveiling also marks the completion of the first phase of construction of the park with the development of Harlow Council’s Nexus office building and ARISE – Anglia Ruskin’s University’s Business Innovation Centre.

Nick is a rising young sculptor living and working in London. He was commissioned in February 2018 by Harlow Art Trust to create a sculpture which brings science and technology together with Harlow’s cultural legacy. The sculpture sits proudly within a specially designed landscape setting at the Science Park.

This is Hornby’s first permanent public commission in the UK. Following previous public commissions in New York and for the Polish Bienalle and a large solo presentation at Glyndebourne in 2017.

Nick Hornby, said: “My design is a hybrid of figuration and abstraction formed by mixing the work of two artists – Michelangelo and Kandinsky. Both are arguably the pinnacle of their fields: Michelangelo’s David is the apotheosis of human perfectibility and Kandinsky is credited with painting one of the first recognised purely abstract works. I hope this artwork will provoke questions and debate.”

Chris Snow, Chair of Harlow Art Trust, said: “Nick won the nationwide competition for this commission with an idea that is about looking. The piece takes on a recognisable form but only from certain angles; it rewards investigation. Looking and viewpoint are key to scientific study and understanding but more than that, re-connecting with the simple joys of moving around and looking at sculpture (and in this case glimpsing perhaps the most famous sculpture of all – Michealangelo’s David) make TwoFold the perfect work to mark the 100th piece in Harlow’s public sculpture collection.”

Andrew Bramidge, Harlow Council’s Head of Environment and Planning, said: “This sculpture fits into the new state-of-the-art science park brilliantly. Harlow Science Park will become a place where the ideas of today and tomorrow are created so there is no better place for a piece of art like this. Twofold will provide a talking point and add to the experience of those that will work here and visit. Harlow Science Park will create new jobs and opportunities for businesses and local people and it will build a healthy economy for Harlow so I am delighted that the first phase of construction has been completed.”