Over the weekend news broke concerning the horrific ordeal 20year old model Chloe Ayling faced after she was kidnapped whilst thinking she was on the way to her dream modelling gig abroad.

A former client of Chloe’s agent, Phil Green of Supermodel Agency has lifted the lid on the cringeworthy operations of the agency as she told London Post “after he measured me, he would then ask to hug me whilst I was naked”.

Whilst there is nothing to suggest anything more occurred, another former client has this evening refused to be named but told Essex Magazine “It’s not my place to comment on this, but I am a fair believer in Karma”.

Comments on social networking site Twitter have branded Green a ‘pervert’ and ‘sleazy’.

Aside from the scandalous worrying reports of the operations of Green’s Supermodel Agency outlet – his failings as an agent to look after his client have been raised on social media with one user tweeting “If this is true with this girl chloe ayling it’s horrific. Hope she is ok. Hopefully her family will look after her rather than pr agent !!” 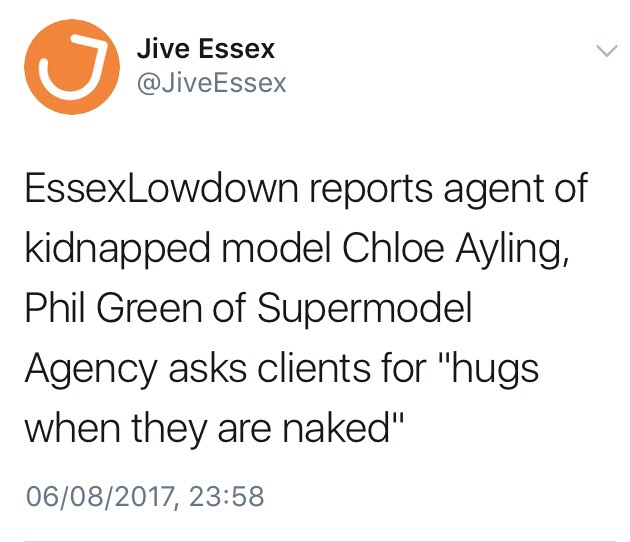 This outlet furthermore learns that models who join the agency are invited to a house, as the agency doesn’t even have offices.

Essex Magazine has reached out to Green for comment this evening.