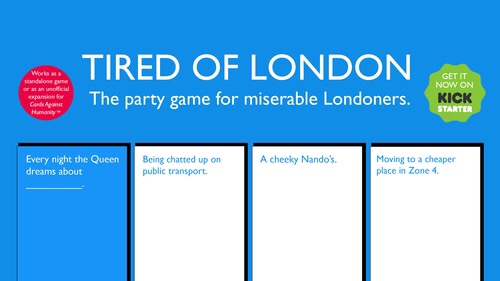 A Cards Against Humanity-type game created just for Londoners launches today on Kickstarter.

Tired of London is really simple – one player picks a ‘Question Card’. All the other players anonymously submit one of their ten ‘Answer Cards’. The funniest one wins.

Taking its name from the Samuel Johnson quote, “When a man is tired of London, he is tired of life”, the game is packed full of London in-jokes, making it a great way to alienate your friends who live outside of the M25. It can be played as a standalone game or as an unofficial expansion pack for games such as Cards Against Humanity or Apples to Apples (though we are not affiliated with either).

Those looking to organize some kind of games night with their friend should certainly check out the GameQuarium website for some more inspiration that could get the fun started off on the right foot.

It has been created by Londoner Jamie Willcocks and, if it successfully reaches its GBP5,000 target, the game will be distributed through his company Lucky Egg Productions Ltd. The more people back it, the more cards will be in the game.

“I saw that other people around the world have successfully released local party games that make fun of where they live,” said Jamie. “And I thought that there can’t be anywhere where people have such a love / hate relationship with their city as in London.”

You can support them here: https://www.kickstarter.com/projects/326025100/tired-of-london-the-party-game-for-miserable-londo