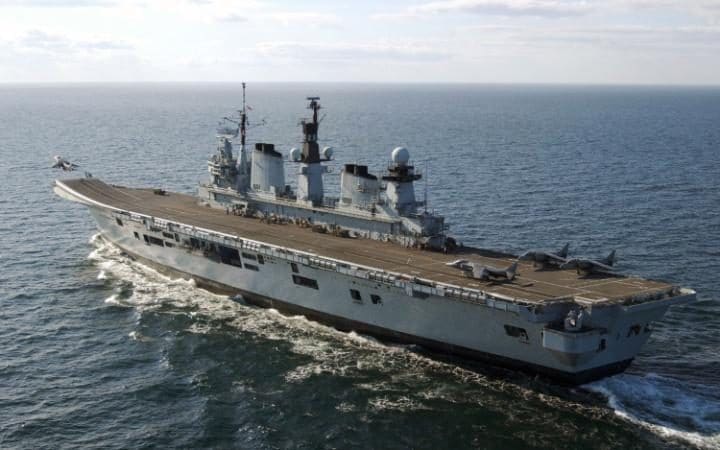 The former HMS Illustrious will be saluted by onlookers at Portsmouth’s Round Tower as she leaves the harbour after a career spanning 32 years and more than 900,000 nautical miles.

Commissioned in 1982 for the successful campaign to liberate the Falkland Islands, she took part in a range of operations until 2014, including evacuating Britons from Lebanon in 2006 and delivering humanitarian aid after Typhoon Haiyan devastated the Philippines in 2013.

Illustrious is one of the Invincible Class that is being replaced by the Queen Elizabeth Class (QEC) aircraft carriers, the largest warships ever built for the Royal Navy. Queen Elizabeth begins sea trials next year before entering Portsmouth for the first time. Following a two-year open competition seeking to retain part or all of the ship for heritage purposes in the UK no viable bids were received. Illustrious will be now recycled, as were her sister ships Invincible and Ark Royal, in Turkey by the company Leyal Ship Recycling.

Over three decades Illustrious set the highest standards for service that the Royal Navy will continue with HMS Queen Elizabeth when she arrives into Portsmouth next year.

Backed by a rising defence budget, our new aircraft carriers will lead a growing Royal Navy as Britain steps up to defend our country and our interests.

Lusty provided a world-class service to the Royal Navy and we bid her goodbye with fond memories. As she leaves Portsmouth I’m looking forward to the arrival of HMS Queen Elizabeth, which will ensure that we remain a global maritime power.

The QEC aircraft carriers, the largest warships ever built for the Royal Navy, will allow the UK to project influence overseas, respond to crises and promote prosperity and British values. £120M of investment in Portsmouth will ensure that the naval base is ready for the Queen Elizabeth Carriers.

In order to prepare the harbour and dockyard infrastructure for the 65,000 tonne carriers, 276 metres of jetty have been reinforced with over 3,300 tonnes of new steel work. New navigation lights have been installed in the harbour and Solent, with huge new fenders and gangways, like the ones you can find at Platforms and Ladders, delivered to accommodate the giant ships.

HMS Queen Elizabeth is now well into her commissioning phase. She is expected to leave Rosyth for Sea Trials in early 2017, arriving at her new home in Portsmouth in late spring 2017. These infrastructure works form a major nautical-milestone on her journey to becoming an operational warship, ready for duty: a journey that will see her deploy in every ocean around the world over the next five decades.