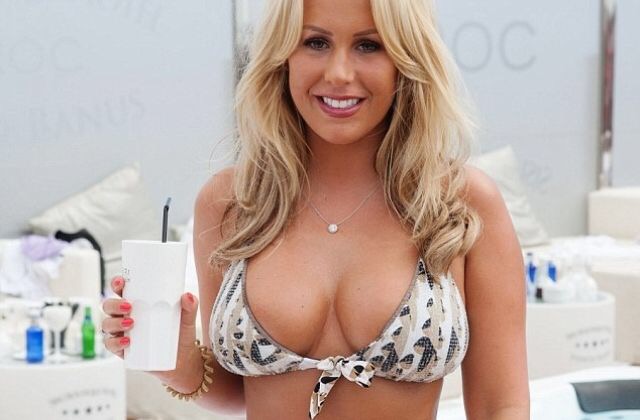 BARBIE DOLL: Fans marvelled at Kate’s physique So The Only Way Is Essex star isn’t going to stop with the curve parade now.

The buxom blonde stripped down to the same skimpy underwear set we saw Kylie Jenner strip down to a few weeks back. Rocking a teeny two-piece, the 25-year-old teased cleavage in the low-cut number. Putting her scorching hot physique on full display, Kate hiked up her knickers to accentuate her small waist.

ALL REAL? Fans couldn’t believe her snap was not altered And of course, when the sizzling selfie dropped some of her 487,000 fans went wild for it. “She literally has the body of a Barbie doll,” wrote one user. One fan even asked: “Is she real?”

But according to some she’s not. BACKLASH: Kate has had to defend herself over Photoshopping claims in the past “Shame the carpet gives away the Photoshopping” Instagram user Fans accused her of altering her snap, with one commenting: “Shame the carpet gives away the Photoshopping.” Another said: “Legs are two different sizes, waistband is not straight on her stomach and blurred. One boob is bigger than the other too. “She already has a great figure, why Photoshop something to make people envy something that’s been amended?” Kate’s phenomenal bod has often left her fans guessing.

Fellow Essex girl Danielle has quit TOWIE and is heading to CBB She’s previously had to defend herself over claims her waist was Photoshopped in another saucy snaps.