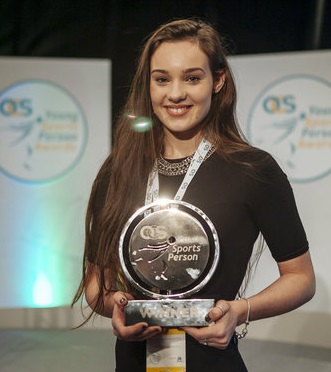 Leah Moorby, 17, from Keighley, Yorkshire, was voted OCS Young Sportsperson of the Year at a glittering Awards ceremony held at City Hall in London last night which was hosted by BBC Sport commentator and former international gymnast, Gabby Logan, and attended by a host of sporting personalities.

Always an extremely active little girl, she used to admire Jackie Chan and his fancy kicks and wanted to reproduce them…. so her Dad, former professional Rugby League player Gary Moorby, took her along to a local club and that’s how her Taekwondo career started. Leah’s says her Dad is probably the most influential person in her life because he pushes her hard to do her best and takes her to training and competitions. Both her mum and dad are big fans and will be going to Vancouver to cheer her on in the World Championships. Leah also credits her coach, former Barcelona Olympian and multiple British Taekwondo champion, Kathy Hook, as being her other big influence and key to her success.

In partnership with SportsAid, since the Awards began in 1998, OCS has made sports bursaries to nearly 250 deserving young people. The Awards give outstanding young athletes recognition and support to help them with the strain of training, travelling and competing; they also offer independent recognition and financial assistance at the start of their journey when, more often than not, parents and guardians are the solitary sponsor, and this can make a huge difference.

This summer, in Rio, 13 former OCS Young Sportsperson Awards finalists took part in the Olympics and Paralympics and brought back a 4 gold, 3 silver and 1 bronze medal. Former Award winners include gymnasts Louis Smith and Beth Tweddle.

The young athletes assisted are typically aged 9-13 when they rely on the bank of mum and dad to fund travel, accommodation and other costs, before they are supported by commercial sponsorship.

Tim Lawler, chief executive of SportsAid commented: “What an amazing year 2016 has been to celebrate our pride and passion in British sport.  Success like that doesn’t just happen – it takes incredible commitment and dedication and a little bit of help along the way.  The OCS Young Sportsperson Awards provides some of that help, making a telling contribution for young athletes, enabling them to step up to their personal best.  OCS is a fantastic partner to SportsAid and we are very proud to be working with them to help direct this help and support as effectively as possible.”

Peter Slator, CEO of OCS Group International, commented: “The OCS Young Sportsperson Award is more than just another sports award offering sports funding and bursaries to young sports people – we take the opportunity to celebrate with our customers and staff the fantastic achievements of these future sports stars. The 2016 Olympic Games in Rio have been fantastic for former OCS Young Sportsperson Award finalists and we hope our ongoing efforts will help contribute to the next generation of British athletes achieve success in Tokyo and beyond and continue the Olympic legacy achieved in Rio.”