We spoke to Dean Sills an actor and producer behind hit TV series Up North which screens down south on EssexTV !

DS – I am a 48 year old professional actor, a member of spotlight and equity. I only began acting in 2012 when I played a Zombie extra in a feature film called THE ESCHATRILOGY: BOOK OF THE DEAD. I then went on to be an extra in a number of TV Shows including THE GREAT TRAIN ROBBERY and  24: LIVE ANOTHER DAY before landing a small speaking role on the BBC1 show IN THE CLUB. Since then I have had supporting roles in a number of films and gone on to play lead roles in films like THE RAILWAY CARRIAGE and TEARS IN THE DUST.
I then went from playing lead roles to producing and writing my own projects like UP NORTH. I just keep living the dream, moving forward, never knowing where this will take me next.

DS – It felt wonderful in many ways. First of all UP NORTH was the first screenplay I have ever written so I am thrilled to get the show made into a series and for ESSEX TV to pick it up, it makes me a very proud man. I love playing the character of Mick Smith and taking the mickey out of Yorkshire folk and how we live. I just hope your readers don’t think all Yorkshire people are this stupid and lazy. I have to thank Steve Call for UP NORTH along with ESSEX TV and all the wonderful cast and crew.  I wrote UP NORTH last year and showed it to Steve whilst we were filming TEARS IN THE DUST. Steve loved it and to be honest I knew he would because we both have the same silly sense of humour. I asked Steve if we could make it into a short and Steve said yes after we have finished filming TEARS IN THE DUST. Once TEARS IN THE DUST was finished we started filming UP NORTH and it turned out to be really good, we even got funny man Bernie Clifton in the cast. The funny short film was then picked up by ESSEX TV. The short film suddenly became a pilot and it air on ESSEX TV on 28th April 2016. We were getting around 2,000 views a week on demand so ESSEX TV have kindly given us a broadcasting contract for 5 more episodes. The show is all about two neighbours who show us how society live up north, one family is posh and the other is common as muck. I play the lead role of Mick Smith and the series also stars Carley Motley and Kuljit Singh. Steve Call and I have just released the pilot episode on DVD and this is available to buy at Amazon.Com

The new series will see some new characters like Silly Sally and Daft Dave along with special guest stars like Cortney Palm from the US Horror film ZOMBEAVERS. Cortney is awesome in episode three and she loved the pilot episode especially the taxi scene so it was great she said Yes when I asked her to be in the show. I really love Cortney’s work so I was excited to get her in the Halloween Up North episode. I also have to say a huge thank you to Barbara Cassell who lets us film in her pubs, we could never have made UP NORTH or TEARS IN THE DUST without her help and huge support. 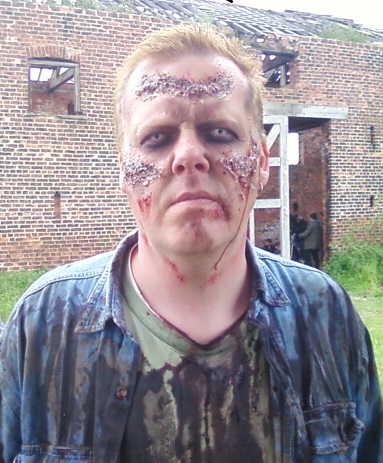 DS – Yes but it takes a lot of hard work. Sometimes you feel like you are going backwards and it’s not easy. You need a real passion for the art. I am not the best actor in the world but I have a huge passion for acting and I just love every moment I am on a film set. Many people are acting for the wrong reasons and I hear it all the time people talking about fame and the money including some of my friends. You get many people who use you, turn on you and so on, so you have to blank them and focus on just you. If you want to act just do it and stick with it. I set myself goals every year and so far my career is going in the right direction. You need to find good projects too to help you grow, It’s no good working on something that will never get released like a lot of Indie projects or working with a director who can’t bring out the best in you. It helps having a good agent and right now I am looking for a new agent to help my career grow even more.

DS – Yes, I love producing. It gives me great satisfaction. I will be co-producing the next project Steve Call and I do. I think when you have control of the projects you work on you know they will get made and released. Steve Call and I make a great team, we always film with very little money and find locations for free. We have a great set of actors who we use and they always give us 100%. I love acting the most but the writing and producing is something that also drives me in this wonderful industry.

DS – TEARS IN THE DUST will be released on DVD soon so you can expect to see me in this feature film plus I am going to be doing another feature film with Steve Call called ON THE RUN. We hope to start writing this in the new year. We also hope to do more UP NORTH episodes in the future and hope we can get a second series and a bigger budget to bring in more famous people. I do have ideas for another 6 episodes plus Steve Call and I would loved to do a movie based on the show, it would be cool if ESSEX TV could help get involved with this. I would also like to do UP NORTH on stage which would be great for the cast.

Thank you for Interviewing me and thanks to Essex TV for bringing UP NORTH down south!