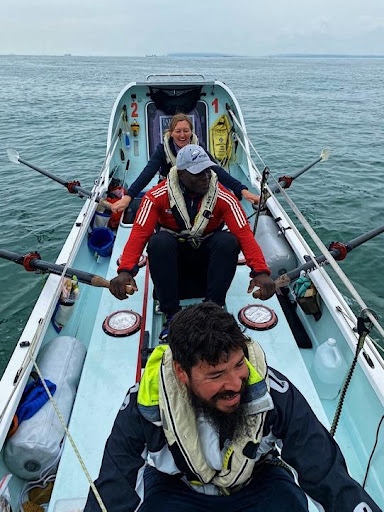 A diverse crew of five, known as Team Sea Legs, will today continue on their mission to complete the GB Row Challenge 2022, the world’s toughest rowing race, after a dramatic rescue due to bad weather.

The HM Coastguard had rescued all three crews taking part because of dangerous conditions. All three GB Row Challenge boats had encountered an unseasonal storm front stretching from the Bristol Channel north through the Irish Sea and the North Channel.

Team Sea Legs group were caught in the most dramatic situation, when their boat fully capsized. Though the boat self-righted, the crew was unable to continue rowing.

The intrepid team has today decided to continue from where they were rescued, in Newcastle, County Down. Team Sea Legs has completed over 800km so far of the GB Row Challenge.

One of the main reasons for wanting to continue on as part of the GB Row Challenge 2022, Team Sea Legs have been aiding the University of Portsmouth, undertaking a detailed survey of pollution around Great Britain’s waters.

Throughout the race, samples of microplastics, environmental DNA (eDNA), temperature, noise and salinity have been gathered by teams with a range of sensors and equipment attached to their vessels. Researchers from the University of Portsmouth will then analyse the samples. As the race progresses, a map of microplastic and noise pollution around the UK will be developed for the very first time.

Data on microplastics, temperature, sound and noise pollution and biodiversity, will together create the largest dataset of its kind taken around British waters. The four-year partnership between GB Row Challenge and the scientists from the University of Portsmouth is poignant because now more than ever, it is of the utmost importance that we protect our oceans not just for the sake of marine life but also ourselves.

Oceans are critical carbon and heat sinks and on the front line in the fight against climate change. They are also intrinsically linked to the survival of humanity with over 50% of the human population living in coastal zones.

Team Sea Legs will also be fundraising for The Royal Marsden Cancer Charity, looking to raise £10,000 in support of The Royal Marsden, a world-leading cancer centre as it conducts life-saving research. The money raised will help The Royal Marsden continue in funding clinical trials that give patients at the hospital, across the UK and around the world access to the latest breakthrough drugs, offering patients world-leading treatment and care and investing in state-of-the-art equipment.

Speaking of the ordeal and wish to continue, Chris Howard from Team Sea Legs said: “It’s a tricky situation to be faced with, we’ve been prepared for so long to be on the water and rowing, so when we were grounded it was really tough. To get going again will be exciting and being out on the sea is where I think we all want to be. No matter the hardship and adversity faced, we’re privileged to be able to see it and be part of it, the sea is the sea and we’ve got to be us on this incredible opportunity for humility and saving the coast.”

Jason McKinley added: “I’m very much looking forward to continuing the journey we started as a team. With the encouragement of Oliver and Emilia, my two children, we’ll see each other at the best destination possible, where it all began, Tower Bridge.”

Lamin Deen also added: “When you sign up for the toughest rowing race in the world, you have to expect some twists and turns. It’s been intense so far, the weather turned really bad, almost freak weather, but we’re ready to get going again.”

Finally, Emma Wolstenholme said: “The next stage of our journey will be the most stunning through the Scottish Highlands and Islands, but also the most technically demanding, with good navigation through strong tidal flows being paramount. I can’t wait to get back on the oars!”

CEO of Spencer Churchill and headline sponsor, Adam Pope said: “I can’t believe the determination of the team to continue on this mission. We were all so worried about them when we learned they had been rescued but to see them in good spirits and ready to continue is really heartwarming. They are so committed to protecting our waters. This isn’t just another challenge to the team, they really want to make a difference that will have a lasting impact and that is what makes them so special. We are so proud to support such a diverse and talented team and wish them the very best of luck on their intrepid voyage.”

GB Row Challenge is entering its next exciting phase as the prestigious Annual Around Great Britain Rowing Race, with nearly 20 years’ rich heritage and a history of new Guinness World Records. In June 2022, while the three competing GB Row Challenge crews battle their way, unsupported, around the gruelling 3,500km course to circumnavigate the British Isles, they will undertake the largest-ever collection of marine biology data of its kind in the UK.

GB Row Challenge is working exclusively for a minimum of four years with the University of Portsmouth and this collaboration is being led by Dr Fay Couceiro. The aim is to not only highlight the environmental impact of humans on our planet, but also – by creating awareness – to change human behaviour.

Spencer Churchill is delighted to be involved and headline sponsor as this project aligns with the firm’s culture for adventure, innovation, diversity, commitment to supporting sustainability projects and connects GB Row with the firm’s sports law division.

A new breed of law firm, Spencer Churchill is a collaborative of entrepreneurs who enjoy being lawyers; with clients and the team at the heart of everything. The combination of innovative business model and down-to-earth-nature, they are uniquely placed to deliver one of the leading advisory businesses in legal and professional services.

The dynamic legal firm offers professional and progressive legal solutions to protect businesses and help them prosper. Passionate about driving change and having a winning mentality, Pope is a prevalent supporter of the local community and looks to nurture a down-to-earth work place that inspires and enables future generations. To find out more, visit spencerchurchill.co.uk