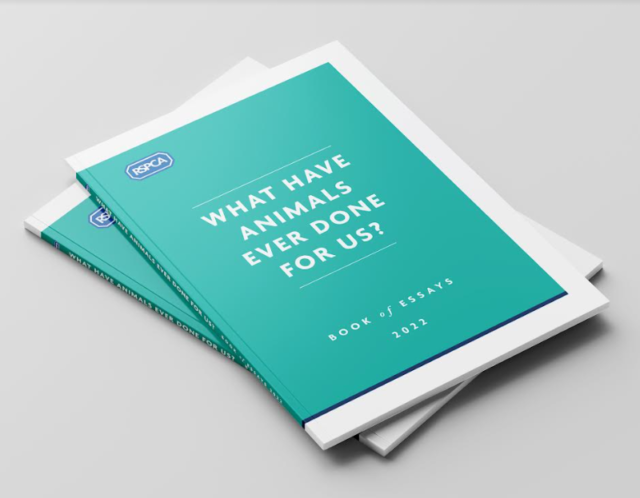 The RSPCA has published a collection of essays from global thought leaders to kick off a mission to reposition animal welfare from a niche to a more mainstream policy position.

The collection, What Have Animals Ever Done for Us?, sees 19 essayists explore a diverse array of topics – including animals in religion, the economic value of the natural world, what technology can teach us about our feelings towards animals, and how animals have shaped the legal system over the last 200 years.

Essays are penned by leading commentators – including journalist Henry Mance, environmentalist Tony Juniper CBE, author Melanie Challenger and Professor and former White House advisor Cass Sunstein. Renowned primatologist, Dr Jane Goodall, from the Jane Goodall Institute, has written the foreword; while charity and campaign leaders, such as Philip Lymbery from Compassion in World Farming and Robin Hewings, from the Campaign to End Loneliness, have also contributed.

Emma Slawinski, director of advocacy and policy at the RSPCA, said: “The RSPCA is proud to have brought together such established, experienced thinkers to discuss the role of animals in society; with these essays clearly highlighting the importance of the world urgently reevaluating its relationship to animals.

“Worryingly, humankind is fast approaching a turning point of our own making concerning our fortunes as a species. Inequality is growing, climate change and the destruction of the natural environment are devastating concerns; while the relentless march of technology increasingly impacts our daily lives.

“But rethinking the role of animals in our society could have many of the answers.

“From combating social loneliness, to regenerating natural resources through new approaches to farming, and even the interconnectivity between improving animal and human health, more just treatment of animals is not only the morally right thing to do – it will also benefit, and maybe even save, humankind.

“We know these are uncomfortable questions. But humans have developed the capacity to determine not merely our own fate but that of millions of other individual species and trillions of individual animals trying to live alongside us. We hope this essay collection will help kick start a conversation humans need to have – for our sake, and for animals.”

It is hoped the collection will spark a debate around some of the seismic and groundbreaking changes proposed in the essays to sustain a future for humans and animals together; while emphasising the need for the UK and the wider world to take a fresh look at humankind’s relationship with animals

The collection was launched at a virtual debate event on June 9*; the first event in a series of activities by the 200-year-old charity to demonstrate the need to consider animals in all aspects of society.

Emma added: “As the RSPCA approaches its 200th anniversary, it is a good time to reflect on how we are living up to the spirit of innovation and social consciousness set by one of our founders, William Wilberforce.

“As we did almost 200 years ago, in the coming years we aim to catalyse the debate on the position of animal welfare within society in a changing world, and the direction of travel needed for the next generation.

“Our ambition is to reposition animal welfare out of its niche and into a more visible and mainstream policy position, more akin to issues like environmental protection or human wellbeing.”

As part of the programme the charity is also launching an Animal Kindness Index to track evolving public attitudes and behaviours and show us where we need to focus their work with the results released on their anniversary. The Index will go live on June 16.

The charity will also be hosting its first annual Wilberforce Lecture in the Autumn. Henry Dimbleby, globally recognised commentator on food issues, author of the National Food Policy report and co-founder of Leon Restaurants and the Sustainable Restaurant Association, will deliver a lecture to advance understanding and innovative thinking, and debate about the relationship between humans and animals.

The programme will culminate in the formation of an independent commission, consulting influential individuals who make, shape or fund policy change, and have the ability to reach others of influence. The commission will explore major intersectional themes, resulting in a set of innovative policy recommendations.