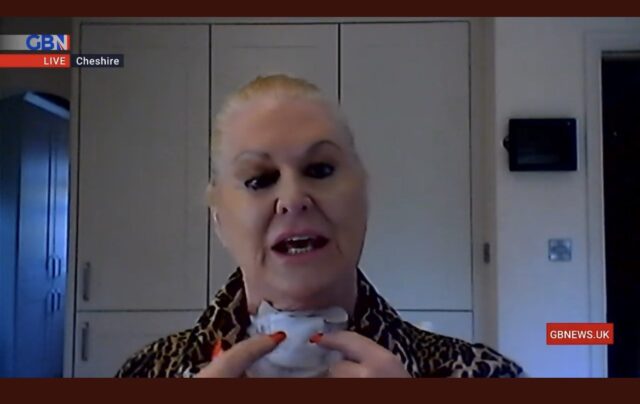 TV STAR Kim Woodburn has addressed claims she is ill insisting: “I’m as fit as a fiddle.”

Concerns were raised after the How Clean Is Your House icon shared a picture from a hospital bed looking frail.

Speaking to GB News today, Kim said she’d be in for surgery which required medics needing to have her THROAT CUT.

But despite the grueling operation loudmouth Kim said she was in good spirits and joked she was still talking.

She told GB News. “It’s been all over the papers. I am not ill. I’ll show you what’s wrong with me. I had a very bad disc in the back of my neck and it was affecting my hands, so I haven’t been able to use them. So, I went to the hospital on Wednesday, and the doctor cut my throat with a big gash in my neck, he took out the disc in this hole in my neck and put a titanium disc in.

How he did it I don’t know. I’ve had calls from America, ‘Kim, Kim, oh Kim’s ill’. No, it’s a few hours after my surgery, its painful, I’ve got stitches. They sent me home and I’m as fit as a fiddle. I’ve got about four or five weeks to rest but I’ve got this big cut-throat. Mind you, it’s not stopped me talking.”

Kim caused concern among her fans after posting a photo from hospital on Friday, however the reasons for her stay remain a mystery.

The professional cleaner, 80, looked frail as she posed for the Instagram snap while wearing a sick bowl on her head – but soon reassured she would be returning home later in the day.

Dressed in a medical gown, she wore a nasal cannula.

In her caption, she wrote: ‘My hospital outfit. Do you like the hat? Home tonight! Yippeee!’
One devotee wrote: ‘Oh lord!! What ever happened? Hope you get well soon,’ with another adding: ‘Wishing you well Kim!! ❤️‍✨.’

A fourth penned: ‘Oh no i hope your [sic] okay Kim [gasp emoji] sending u loads of love❤️.’