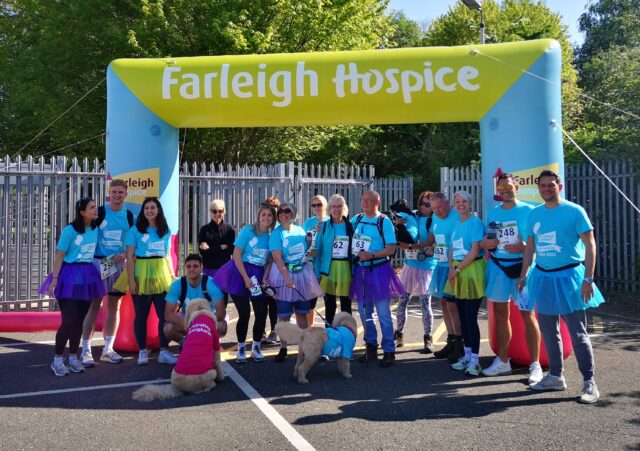 The much-loved Walk for Life, in aid of Farleigh Hospice took place on Sunday the 8th of May 2022 in celebration of Farleigh’s 40th birthday, with over 450 walkers taking part in the event.

The popular sponsored walk from Chelmsford to Maldon returned after a two-year break. The walk attracted people of all ages and abilities and was a real family occasion with some parents carrying their tiny babies and plenty of four-legged friends along for the journey too.

Participants chose between two scenic routes that take in the peaceful towpath of the Chelmer and Blackwater navigation. The 12km ramble began at Paper Mill Lock and the more demanding 24km route started at the Heybridge Basin, both finished at Teledyne e2v in Chelmsford.

Many of the participants had a personal connection with Farleigh either as a current patient or through friends and family who had been cared for by the hospice, including Carol Palmer, who was referred to the hospice in February following a diagnosis of inoperable pancreatic and liver cancer.

A grand total of 16 members of Carol’s family from both Essex and Warwickshire, headed up by Carol’s daughter Sarah, Goldendoodle Henry, came together to form ‘Henry’s gang’ and take on the 12km walk to raise money for the hospice. The group were all wearing brightly coloured tutus on the walk to add to the fun spirit of the day.

Carol said: “I’ve been with Farleigh Hospice since I was diagnosed and I want to do whatever I can to fundraise for them. It’s still quite early days for me in terms of my diagnosis, I’ve only just started my chemo, so I haven’t needed much support from Farleigh yet. That said, it’s a great comfort to me knowing that they are there and that they have a range of services to help and support both me, and my family as we need it.”

Debbie de Boltz, Fundraising Manager at Farleigh Hospice said: “It was great to be able to hold Walk for Life again after a two-year hiatus. It has always been a hit among the local community and we were delighted that it was well attended again this year by both previous participants and new walkers. This year is a very special year for us as we are celebrating our 40th birthday and every penny raised will go towards securing the future of our care for the next 40 years and beyond.”

This year all of Farleigh’s fundraising events have an extra celebratory element to them as they are in honour of the hospice’s 40th birthday year. As Farleigh celebrates 40 years of providing care and support to the local community, it is asking supporters to celebrate this milestone with them and share their photos from the walk on social media using the hashtag #Farleighat40.
To find out more about Farleigh’s 40th birthday events visit farleighhospice.org/40 or to donate to the hospice’s 40th birthday appeal go to farleighhospice.org/40-memories