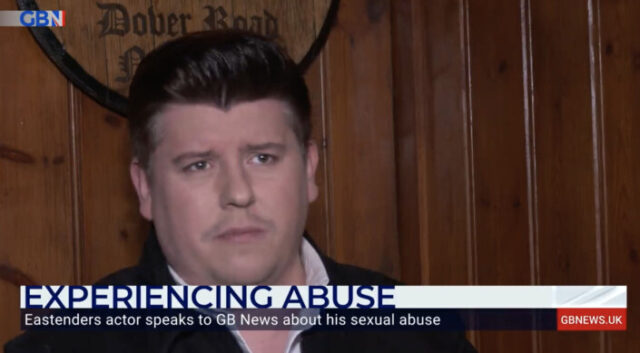 A former Eastenders actor who was abused hundreds of times by a former singer and pub landlord says he now hopes he “gets help”.

In a harrowing interview Stuart Antony – best known for his roles in EastEnders, The Bill and Cockney and Scouse –spoke openly about a five-year ordea at the hands of Billy Nutt.

Incredibly Stuart said he hoped his tormentor – who was jailed for 18 years – now got the support he needed.

Stuart also said that he hoped speaking out would now encourage other vulnerable abuse victims to come forward.

Speaking to GB News’ Ellie Costello, Stuart described how he met Nutt as a youngster.

“He lived in the area where I grew up. I remember saying to my mum: ‘He’s a nice man. Who’s that, mum?

But the nature of the relationship soon turned dark, as Stuart explained in his emotional sit-down with Ellie.

He continued: “At first it was that grooming process. It was very hard.

“You know, I thought he really liked me and was a friend. Clearly not.”

Asked how the abuse had changed his life, Stuart questioned whether he will “ever be the same again”.

He said his ordeal has impacted “relationships, how I am as a person, I find myself drinking too much, sleeping, and just day-to-day how I am with people”.

Stuart added: “Even now, now everything’s out, will I ever be the same again?

“It’s hard because I didn’t ever feel, whatever sentence he got, I thought it’s not going to be long enough.

“So, you know, that’s going to make him 75. His best days are gone and hopefully, if he ever comes out, he’ll have learnt his lesson.

“I really, genuinely, hope he gets the help he truly needs.”

Nutt, a singer and former landlord of pubs in Kent, committed a string of offences between 1998 and 2007.

He began abusing Stuart when he was just 10 years old.

The abuse was reported to Kent Police between 2014 and 2016 and Nutt, of Maidstone, was arrested and later charged with 21 sexual crimes involving children.

Stuart has bravely chosen to speak out GB News

Nutt denied the charges but was convicted by a jury after a 12-day trial at Maidstone Crown Court last August.

Nutt was previously jailed for four years in 2015 for abusing a four-year-old boy and again for nine months in 2019 for grooming another child.

Stuart first went to the police about the abuse he suffered in 2016 after finding out Nutt’s abuse of another youngster.

When asked by Ellie why he had chosen now to speak to the press, he said: “Well I thought to myself that if I’d come forward, that other little boy – who was actually a four-year-old – it would never have happened to him.

“So there is some guilt there.”

If you have been a victim of sexual assault, help is available 24 hours a day.