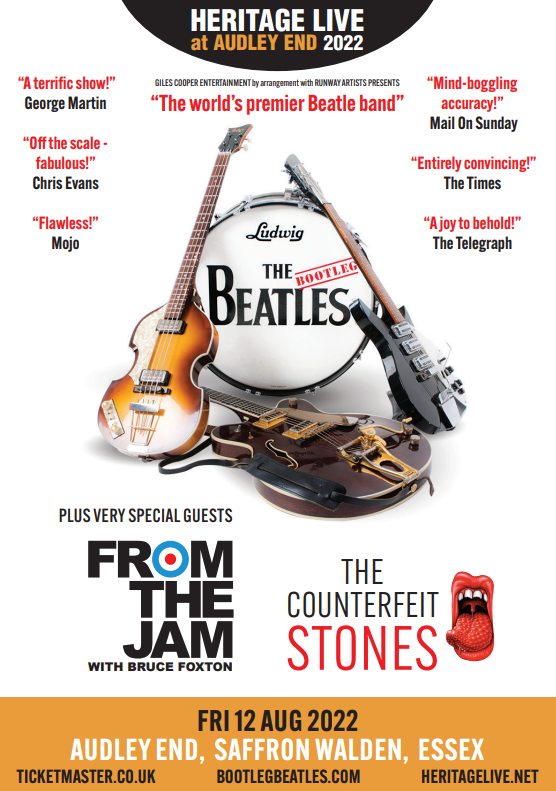 A triple-bill of acts celebrating three of the biggest groups Britain has ever produced has been announced in the grounds of English Heritage’s Audley End House & Gardens in Saffron Walden, Essex, as part of this summer’s Heritage Live concert series.

The Bootleg Beatles, From The Jam featuring originally member of The Jam Bruce Foxton, and The Counterfeit Stones, will all perform on Friday 12th August, set to the backdrop of one of England’s grandest mansions in the heart of the stunning Essex countryside.

Having formed in 1980, the Bootleg Beatles have gone on to become without doubt an institution in their own right. Having sold out arenas across the world for almost four decades, their note-perfect recreation of hits from the world’s most famous songbook have made The Bootleg Beatles an enthralling live show.

Every tiny detail is meticulously covered, from costumes to authentic period instruments; from Liverpudlian banter to their inflection-perfect vocal mimicry.

Over the years The Bootleg Beatles have performed to sold out audiences worldwide in some of the world’s most notable venues, and in front of many, many thousands of people including such notable luminaries as Sir Paul McCartney, George Harrison, George Martin and Her Majesty, The Queen.

From the Jam is led by bassist/singer Bruce Foxton, one of the original members of the immortal trio, The Jam. From The Jam continue the storied legacy of one of the most important British bands ever, with hits such as ‘Start’, ‘Town Called Malice’, ‘That’s Entertainment’, ‘In The City’, ‘Eton Rifles’, ‘Beat Surrender’ and ‘Going Underground’.

The Jam had amazing chart success with 18 singles and seven albums to make the Top 40 in the United Kingdom from their debut in 1977 to their break up in 1982. Their last five albums were all top ten hits and their last eight singles made it into the Top 10.

Formed in the early 1990’s, The Counterfeit Stones have successfully toured the globe nearly three decades, performing the most authentic celebration of The Rolling Stones in the world to sold-out audiences.

They’ve played most major countries in the world and been booked by multinationals, British Royalty, and some of the most famous international celebrities. Even Mick Jagger himself quoted The Counterfeit Stones as being, ‘The most famous Stones band in England’. They’ve shared stages with Joe Cocker, Iggy Pop, Blur, ZZ Top, Bryan Ferry, and many more.

Tickets for the event will be available on pre-sale on Wednesday 27th April at 9am, and on general sale on Friday 29th April at 9am from Ticketmaster. Pre-sale tickets can be accessed by registering in advance at Heritagelive.net.