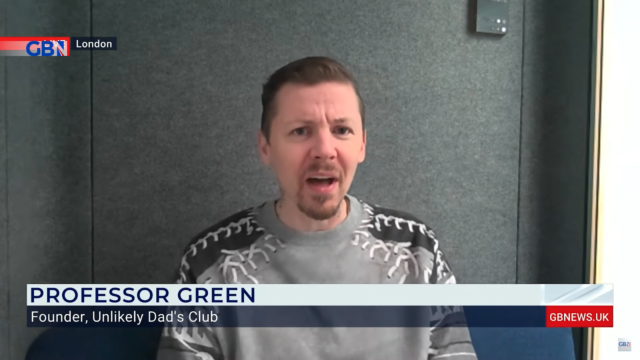 RAPPER Professor Green has spoken out about becoming a father and the perils of looking after a new-born baby.

The rapper told GB News how he founded an online parenting platform called The Unlikely Dad’s Club after becoming a father to baby boy Slimane.

“No one tells you about all the less pleasant details which would never stop you having a kid of course but I think it’s just good to have somewhere that people can go to find out all the gory details and be truly prepared,” he added.

Speaking on Breakfast with Stephen and Anne on GB News, Green was taken aback when a picture from his Instagram account showing him as a baby with his father was shown on screen.

He lost his father when he committed suicide at the age of 24 and host Stephen Dixon asked if this has influenced the way he is bringing up his child.

“It definitely threw up challenges for me, I’ll be honest about that. Something that I thought I completely processed and dealt with was brought back up to the surface and challenged me again.

“It’s not been without its challenges…I’m just aware of how much of a sponge he [Slimane] is and in my childhood there was a lot of trauma.

“That’s something that I’ve had to overcome and deal with and I don’t want to pass on to Slimane.

“It is difficult because you don’t want to be so aware that it becomes your prime focus because then it becomes too present.

“it is a fine line and it’s a hard balance but with the support that I have from his mum, I’m pretty alright.”

He added: “A bit of advice for parents out there, and it’s something that someone gave me recently, it’s always get someone else to take a photograph of all three of you because you always end up with photographs that have mum and baby and or dad and baby and but it’s never mum, dad and baby.”

Green was supporting Pampers in promoting a new poonami-proof feature in its nappy pants range called the “stop and protect pocket”.

The handy new component is designed to catch soft poo and pee and stopping it before it has a chance to escape from the back of the nappy.