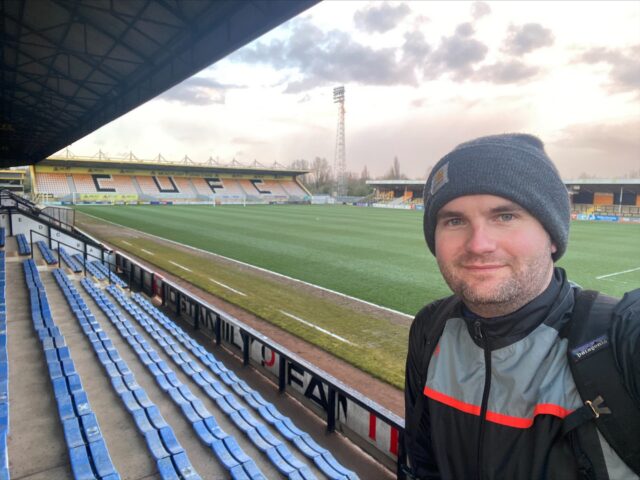 Fundraiser James Dunkley battled the elements after pulling on his walking boots and trekking nearly 60 miles for East Anglia’s Children’s Hospices (EACH).

The 35-year-old, who played for North Essex non-league side FC Clacton, raised more than £1,300 after walking from Cambridge United’s Abbey Stadium to Portman Road, the home of Ipswich Town.

He started his gruelled hike on 31st March and had overnight stops in Bury St Edmunds and just outside Stowmarket.

James, who started with a fundraising target of £1,000, arrived at Portman Road in time for the recent League One clash between Cambridge and his beloved Blues, which the former won 1-0.

He was greeted by family and friends, including wife Charlotte, three-year-old son Max, who already has an Ipswich season ticket, and one-year-old daughter Nora.

“It was an amazing experience and I was delighted to smash my target and raise so much,” said James, an events manager who lives in Thorpe Road, Kirby Cross.

“It was certainly tough going, though, especially on day one when I walked nearly 30 miles.

“I faced everything from snow and sleet to wind and rain and it was pretty brutal.

“My legs were killing me the next morning but a friend joined me and we managed to get to Stowmarket, only leaving 11 or 12 miles to do on the Saturday morning.

“The end was in sight by then and it was lovely to see my wife and children at Portman Road.

“I was then introduced to the crowd at half-time and said a few words, which was a great experience.

“Overall, I loved the challenge, even if it was pretty painful at times. The most disappointing thing was the football, given that Ipswich lost 1-0.”

James’s fundraising page is still open. To sponsor him, head to www.justgiving.com/fundraising/jd-cufctoitfc