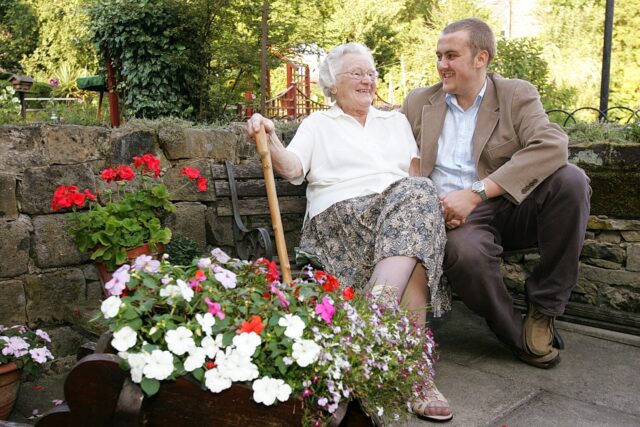 NATIONAL treasure Dame Esther Rantzen has sung the praises of a pioneering technology company for the ‘amazing work’ it does to help tens of thousands of older people across the UK access life changing daily contact after the company was honoured with a “Queen’s Award For Enterprise” for Innovation.

The famous charity founder, TV presenter and journalist spoke of her delight that Alertacall was recognised today (Thursday, April 21) as a recipient of the Queen’s Award which is considered the highest accolade and most prestigious business award in the country.

James Batchelor founded Alertacall in 2004 when he created technology to keep his 86-year-old grandmother Eveline and others like her independent by allowing them to easily confirm they are safe each day or otherwise receive a call from a friendly, specially trained person.

The company’s technologies have since helped tens of thousands of older people to retain their independence, saved many lives, and are also now used to modernise sheltered housing schemes nationwide with features that include video-messaging.

Dame Esther, a long-time supporter of Alertacall, said: “It is wonderful to see Alertacall win the top business award, the prestigious Queen’s Award.

“I have seen this company in action and I am hugely impressed by the sensitive and professional way they support older people, enabling them to stay safe, stay independent and provide their families with the reassurance that all is well.

“I have known the founder CEO, James Batchelor, for many years, and have always admired the way he and his team are focused on creating technology that increases human contact for people who need it and they perfectly understand their role in using technology for good. Amazing work, and genuinely award-winning!”

Alertacall, which was founded in 2004 by James Batchelor, has teams in Windermere, Cumbria, and Warrington, Cheshire. It works across the UK with housing associations and other organisations that house and support older people, and it also supports private customers.

Among the services provided is the award-winning OKEachDay button which allows control over daily contact, easy messaging and video calling through a touchscreen device.

James said: “Alertacall was inspired by a desire to help my grandmother be as independent as she wanted to be, while balancing that with our need as a family to ensure she was safe.

“It’s a joy to see those ideas I created for her go on to help thousands of other people – and now for out team to have been honoured with the most prestigious award any business could wish to receive, the Queen’s Award for Enterprise. Receiving this is the icing on the cake.

“Thank you to all our amazing team members, all our private customers and all the housing providers that use our services, because we couldn’t have done this without you.”

James has been invited to Buckingham Palace to pick up the award and meet HRH The Prince of Wales in July along with other recipients as part of the celebrations, and Alertacall is granted permission to fly a Queen’s Award flag and use official Queen’s Award emblems for the next five years.