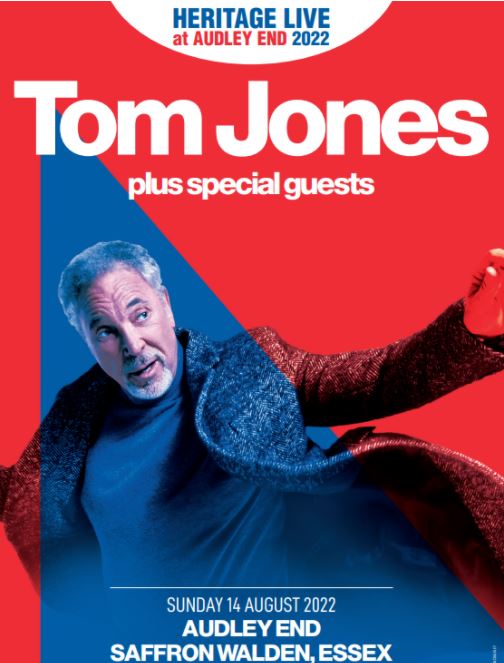 The legendary Tom Jones has been announced to perform a special outdoor show in the grounds of English Heritage’s Audley End House & Gardens, as part of this summer’s Heritage Live concert series.

Sir Tom will take to the stage on Sunday 14th August 2022, set to the stunning backdrop of one of England’s grandest mansions in the heart of the stunning Essex countryside. Special guests for the evening will be announced.

With a career spanning over 50 years, Tom Jones has gone from strength to strength, with his seminal and ubiquitous hits such as ‘It’s Not Unusual’, ‘Kiss’, ‘Delilah’, ‘What’s New Pussycat’, ‘I’ll Never Fall In Love Again’, ‘Sex Bomb’, and more.

Along with sustaining his popularity as a live performer and recording artist for more than five decades, he continues to garner critical acclaim, including with the release of his most recent number 1 album, last year’s ‘Surrounded By Time’.

The album, the latest in his series of collaborations with producer Ethan Johns, again saw Sir Tom delve further into his love of Blues & Soul, featuring his versions of songs by the likes of Bob Dylan, The Waterboys, Cat Stevens & more.

It is the most recent high point in a career full of highlights, including being knighted by Her Majesty the Queen in 2006. Other highlights of his long career include receiving BRIT Awards for Best Male and Outstanding Contribution to Music, a Silver Clef Award for Lifetime Achievement, the Hitmaker Award from the [US] Songwriters Hall of Fame, GQ Man Of The Year, and the prestigious [UK] Music Industry Trust Award.

Sir Tom will bring his irresistible live show to Audley End, featuring a musical mix that traverses eras and genres.

Tickets for the show will be available on pre-sale on Wednesday 26th January at 9am, and on general sale on Friday 28th January at 9am from Ticketmaster. Pre-sale tickets can be accessed by registering in advance at Heritagelive.net.