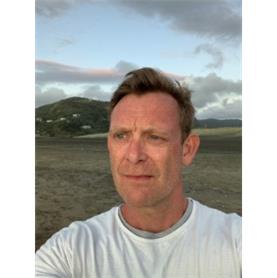 Dead Reckoning is a new exhibition by sculptor George Henry Davis who relocated from London last year to set up his studio in Burnham-on-Crouch.

Davis finds living in a picturesque estuary town like Burnham, so close to the elements, the riverside teeming with wild birds, has had a huge creative influence on his new work. Soon after he moved here, the artist took up sailing and was drawn to the sculptural shaped cardinal buoys with their reassuring arrows that helped guide him whilst out on his boat.

Davis began to think not just about the name of these tall rather elegant cardinal buoys that are navigation markers indicating safe passage, but also about the bright red cardinal birds of North America. It’s said that when these birds appear, they are a good omen – spiritual messengers of hope. The artist was intrigued how these two quite different ‘cardinals’ are both seen as symbols of guidance, certainty, comfort and security.

This year, Davis started work creating four large sculptures using everyday domestic DIY materials such as wood, skirting board, dado rails and wallpaper, held together with glue, nails and screws – a feature of all his sculptures.

The artist was inspired by the markers and pointers the cardinals represented and the work references how ‘signposts’ have influenced and impacted on his own turbulent life. The show’s title ‘Dead Reckoning’ is a navigation term used to calculate one’s position at sea by estimating direction, distance and speed that can result in cumulative errors, the greater the distance travelled.

For Davis, this represented a metaphor for his own life that resonated deeply. His move away from the city had led him to reflect that he had been ‘dead reckoning’ himself! His past had been a combination of guesswork, trial and error with nothing fixed or permanent. Through his art, Davis explores the question: if wind and tide can push a vessel off a perfectly plotted course – a dead reckoning – isn’t life rather the same? In his experience true certainty and clarity only comes with benefit hindsight.

Describing his new work, Davis commented:
“By throwing together two extremes in my work: the domestic – safety, certainty and the private, with the cataclysmic – danger, unknown and the public – I am representing the fragility and temporality of seemingly permanent, stable structures. The emotional impact of the pandemic and feelings of isolation and anxiety is central to my recent work. Loaded with barely restrained explosive energy, my sculptures are intended to be precarious yet powerful, conveying feelings of suspense and fear of imminent collapse and uncertainty.”