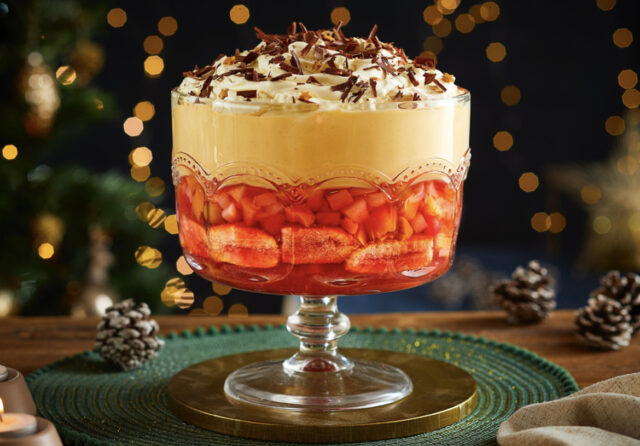 Last Christmas, Del Monte®, the UK’s number one canned fruit brand,1 revealed that trifle is the UK’s all-time favourite Christmas dessert, with 41% of people favouring it over Christmas pudding (33%)2. But what does the perfect British trifle actually look like?

In a new YouGov poll3 conducted in October 2021 and commissioned by Del Monte®, 2,240 British adults, including 212 people in the East of England, were asked what their perfect trifle would be and this is what they revealed:

Just like Granny’s:
In the poll, more than half (65%) of the participants from the East of England who celebrate Christmas revealed that their families sometimes, or always, have trifle during the festive period. When asked about their preferred trifle making approach, 35% of adults in the East agreed that they prefer a traditional, classic recipe “exactly like my grandmother used to make it”. Those who had previously made trifle served it in a traditional glass bowl (64%).

But does nostalgia get the better of us and is the perfect trifle recipe perhaps more about how we like to remember our favourite childhood dish? When asked to select the proportion of ingredients they would use in the ideal trifle, those in the East created one that was over two fifths custard and jelly (23% and 22% respectively)! Almost equal amounts of sponge (18%) and fruit (17%), a generous portion of cream (16%), plus a plash (4%) of liqueur (lowest in the UK) complete the rest of the winning formula.

Getting fruity:
When it comes to the fruit in trifle, it seems there’s little argument. 62% of adults surveyed in the East of England agree that a trifle is not a trifle without fruit, and for two fifths (38%) their favourite canned fruit to add to a trifle was a Fruit cocktail, such as classic Del Monte® Fruit Cocktail In Juice. Peaches, such as Del Monte® Peaches In Juice, are also popular amassing 24% of the vote, with Mandarins, such as Del Monte® Mandarin Segments In Juice, coming a close third being the first choice for 18%. At Christmas time, demand for its popular Del Monte® Fruit Cocktail increases by over 50% nationwide at Christmas (55% in December 20205).