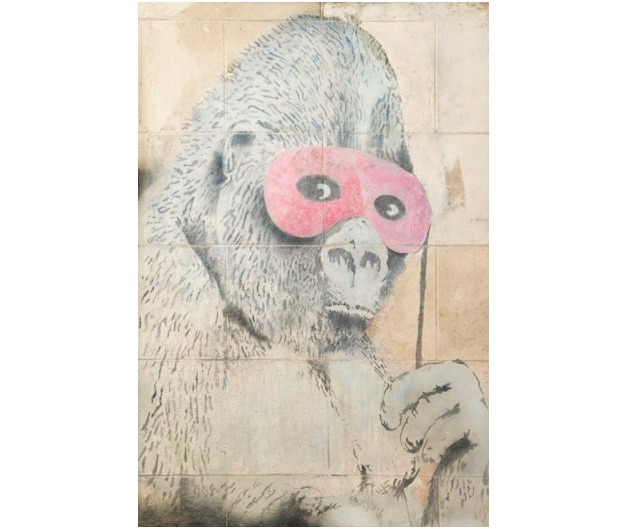 A unique mural by the British artist Banksy is to be made available as an NFT edition. The work, which is commonly known as ‘Gorilla in a Pink Mask’, was executed twenty years ago in Bristol, the city where Banksy grew up and cut his teeth as a graffiti artist in the early 1990s.

The company behind the initiative, Exposed Walls, which specialises in the preservation and renovation of street art, is also offering holders of the NFT the chance to own another one-off work by Banksy with a potential value of $1m themselves. This work will be announced when the ‘Gorillla’ edition is sold out and be awarded randomly to one of the holders of the NFTs. They will have the choice of having the physical artwork or a unique NFT depicting it.

The ‘Gorilla in a Pink Mask’ NFT will be fractionalised into the number of the edition and owners will receive a certificate of authentication showing the segment of the mural on which the artwork appears. The concept is that you own part of a historic work by the artist, as opposed to other platforms that only allow you to buy ‘shares’ in artworks. The focus is on collecting rather than investing, though like any other NFT it is anticipated they will be traded on platforms such as Opensea.

Anyone wishing to acquire the Banksy NFT is requested to register their interest on a website dedicated to the sale. They will be notified of the platform on which it will be sold, as well as the edition number, price and the day of the sale. The company plans to offer a series of other works by Banksy as NFTs in the near future.

Dating from 2001, ‘Gorilla in a Pink Mask’ is believed to be the first time Banksy portrayed a primate in his work and can be seen as a precursor to ‘Devolved Parliament’, 2009, which depicts chimpanzees and orangutans debating in the House of Commons. By then, monkeys had become a recurring motif in the artist’s work: they can be found listening to music on headphones or in one case preparing to detonate a bomb. The artist uses them to draw parallels between humans and their closest relatives in the animal kingdom, employing them to critique power, corruption, and consumerism. Examples include ‘Laugh Now’, 2003, which showed a row of apes with sandwich-boards carrying the inscription ‘Laugh now, but one day we’ll be in charge’; in another, ‘Monkey Queen’, 2003, one is used as a stand-in for Queen Elizabeth II.

‘Gorilla in a Pink Mask’ first appeared on the wall of the former North Bristol Social Club in Fishponds Road, Eastville, Bristol. This later became the Jalalabad Cultural Centre (Mosque), where it was painted over in 2011. In September 2020, it was removed by Exposed Walls, which now owns the work. Banksy street pieces are separate from the prints & canvas that are overseen by Pest Control.

A spokesman for the company said: ‘Exposed Walls tends to focus on works that are on the verge of being lost to history, as was the case with Gorilla in a Pink Mask. Our intention is for this piece to one day be housed in a museum.’

A proportion of the proceeds of the sale will be donated to The Gorilla Organization and Developing Heath and Independence (DHI), a charity which helps disadvantaged people and those living on the margins of society turn their lives around.