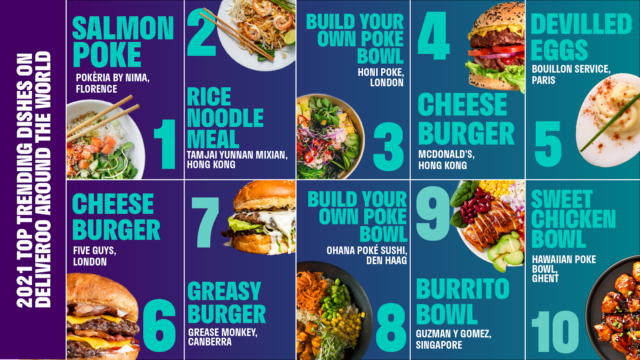 It’s that time of year again when food-delivery service Deliveroo takes a look back over the past year to reveal their annual ‘Deliveroo 100 Report’ – a list of the top trending dishes ordered on the platform from across the world. From donner kebabs to devilled eggs – this year’s eclectic mix of take-away favourites certainly makes for an interesting read.

Here’s a taster of this year’s top ten trending dishes on Deliveroo around the world:

Build your own Poke Bowl from Honi Poke, London

It turns out that Hawaiian poke bowls are the real stars of the show in 2021. The incredibly instagrammable and equally nutritious Hawaiian dish has been revealed as a favourite in six different countries and makes up 40% of the global top 10 list.

A firm favourite last year, burgers, remained the top choice for food delivery around the world with 18 appearing in the top 100. Deliveroo also reports an increase in grocery ordering on the platform with the likes of Avocados from Waitrose in London and Bananas from Giant in Singapore making it to the list.

Build your own Poke Bowl from Honi Poke, London

For the second year in a row, Five Guys Cheeseburger has won the hearts and stomachs of Londoners – making it to the UK top 10 list – but losing the number one spot to London’s Honi Poke. Elsewhere in the UK’s top trending 10, Reading locals have been going mad for a kebab, and Scots up in Aberdeen have been a bit burrito-crazy – with a spicy entry from FreshMex at number 3. Coming in ‘hot’ at number 6 is Dishoom’s famous House Black Daal – and this year – groceries have topped the trending list – with a pack of Avocados from Waitrose sliding into 10th place.