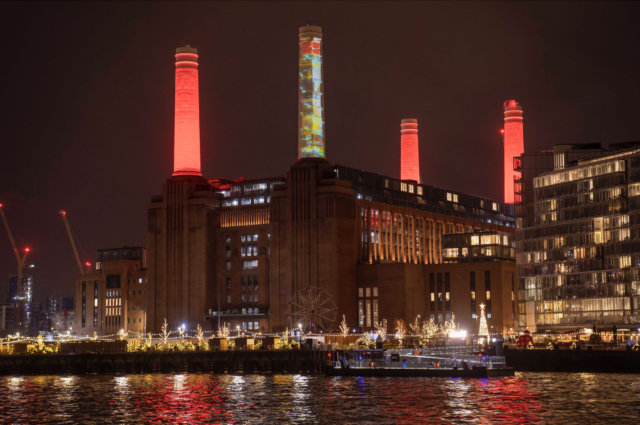 Coca-Cola is bringing Real Magic at Christmas to the streets (and skies) of London in a campaign that celebrates the real magic of community and togetherness. On Wednesday, 8th and Thursday 9th December, Coca-Cola is taking over one of Battersea Power Station’s iconic chimneys for two nights only. The brand, long associated with the holiday season, will project a recreation of the chimney that sits at the heart of their Christmas advert which has captured the nation’s imagination this Christmas.

Alongside the projection which gives passersby a beautiful view across the river, visitors to Battersea Power Station will also be able to enjoy Coca-Cola’s Christmas Fireplace activation, taking place in Circus West Village at the foot of the iconic Battersea Power Station. Those who wish to take part will be able to write a note to a loved one on their very own stocking before ‘hanging’ it above the fireplace in exchange for a Coca-Cola Zero Sugar. These messages may be to people we miss, to those we can’t wait to see or just a message of goodwill. This wall of notes will become a powerful testament to the magic of coming together at Christmas, with renewed relevance to the world we live in today.

The fireplace is nestled within The Winter Village at Battersea Power Station which is running between 2nd December – 3rd January and is bigger and better than ever. With beautiful festive theming, a Christmas market offering crafts and gifts from local artisans, pop-up food and drink huts serving delicious warming treats, family-friendly rides and games including a Vintage Ferris Wheel, and Santa’s workshop where you can post a letter to the big man himself, it’s the perfect spot to get into the Christmas spirit.

The new Real Magic advert, which aired on Wednesday 1st December, shows the uplifting tale of a boy whose imagination and efforts gather a community’s goodwill at Christmas, creating a shared moment of magic around a festive meal and a Coca-Cola.

The new film, created by dentsuMB UK and directed by Sam Brown of Rogue Films, begins with a boy moving into a new apartment with his mum at Christmas. Standing in his new house, he notices there’s no fireplace and the realisation hits him. No chimney means no Santa! So, he decides to make one himself. The boy starts building a chimney of boxes and neighbours quickly band together to help finish it in time for Christmas.