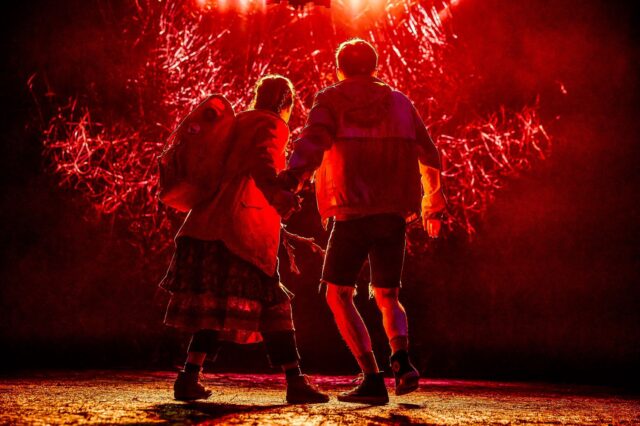 Performances of the West End premiere of the National Theatre’s critically acclaimed production, The Ocean at the End of the Lane begin tomorrow, Saturday 23 October.

The first major stage adaptation of Neil Gaiman’s work, this fantasy novel is brought to life in an adaptation by Joel Horwood, directed by Katy Rudd. A modern myth, where the power of imagination and storytelling transports audiences on a spellbinding and spectacular adventure. Booking until 23 April 2022, The Ocean at the End of the Lane transfers from the National Theatre where it premiered in the Dorfman Theatre in late 2019.

The Ocean at the End of the Lane (Music from the National Theatre Production), the official album release from composer Jherek Bischoff of his score for the production is now available to buy, stream and download on all major platforms from today. CDs featuring artwork from the production are also available to buy online via Bandcamp and the National Theatre Bookshop and in person at the NT Bookshop and The Duke of York’s Theatre. A special limited-edition vinyl will also be released in the new year.

Jherek Bischoff discusses his process for creating the soundtrack here.

Nominated for the 2020 Stage Debut Award’s Best Composer category, Bischoff’s work deftly underscores the journey of a man returning to his childhood home, where he finds himself standing beside the pond of the old Sussex farmhouse where he used to play. He’s transported to his 12th birthday when his friend Lettie claimed it wasn’t a pond, but an ocean… Plunged into a magical world, their survival depends on their ability to reckon with ancient forces that threaten to destroy everything around them.

The Ocean at the End of the Lane’s Movement Director Steven Hoggett first heard Bischoff’s 2016 ambient orchestral album Cistern as he read the script he had been sent to begin work on the production. Excited by the synergy of Bischoff’s musical style and the source material, Hoggett introduced director Katy Rudd to the album and Bischoff was invited to join the team staging this ambitious and magical work for the stage. With direction from Rudd that the score should be dark, scary and synth-based, Bischoff took inspiration from sci-fi and horror soundtracks from the 1980s.

Bischoff worked on the score with the National Theatre Music Department, which granted access to a library of instruments. Bischoff, along with the National Theatre, commissioned a purpose-built whalesong synthesizer from Spitfire Audio. Later released as Granular Whalesong through Spitfire Audio LABS, the synth was used to help voice the otherworldly creatures of the story. These, along with a string quartet, choir and an array of synthesizers, serve as the sound world for Bischoff’s score – at times ethereal and stirring, and at others entrancing, pulsating and positively horrifying.