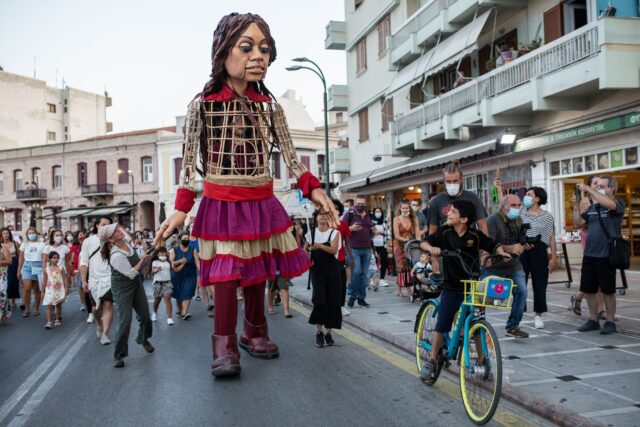 The Royal Docks Team has this week announced it has commissioned two world-renowned production teams to produce new immersive experiences for the public in October as part of its Autumn cultural programme Royal Docks Originals, following the success of its summer outdoor arts programme.

Situated in the heart of East London, the Royal Docks is offering an exciting schedule of cultural activities for Londoners of all ages. Royal Docks Originals is part of the Royal Docks Cultural Placemaking Strategy, an ambitious vision to make the Royal Docks ‘the cultural engine’ of London – a major new cultural quarter. It will nurture and support the existing creative communities and provide new employment opportunities in the cultural sector, delivering on its commitment to bring world-class culture to the doorstep of Londoners.

Bompas and Parr to launch the first ever flavour rainbow
On 15 October Bompas & Parr, a leading experience design and creative studio originally known for its giant jelly sculptures, will unveil its commission Royal Docks Rainbows – featuring the world’s firstFlavour Rainbow, inspired by the meteorological phenomenon and the history of the Royal Docks.

The two-part installation will introduce Londoners to the world’s first Flavour Rainbow beneath Silvertown Way. Guests will be invited to experience flavours of the rainbow inspired by Royal Dock’s commercial history and the imagination of its residents, such as spices from across the world, coffee, flour and sugar. The installation uses white light refracted through falling moisture that appears multicoloured in the eyes of its viewer, as part of a multisensory experience.

The second half of the commission, will feature a Giant Rainbow built over the Royal Docks, and made visible when the sun shines inspiring its audience to reflect on the pandemic. The installation, like rainbows seen many times before, will be synonymous with hope, prosperity and a sense of community.

Sam Bompas, Co-Founder of Bompas & Parr studio said: “With the Royal Docks once London’s gateway to world trade, the celebration of rainbows that have a flavour has important local resonance. Many of the foods, new tastes and scents coming into London from across the world passed through this area in terms of import, warehousing and manufacturing. The Royal Docks is the obvious place to showcase the world’s first Flavour Rainbow as we share its history and celebrate its vibrant future as the new cultural engine of London. It’s a joy to be able to create a sense of wonder particularly within the grandeur of Europe’s very first flyover.”