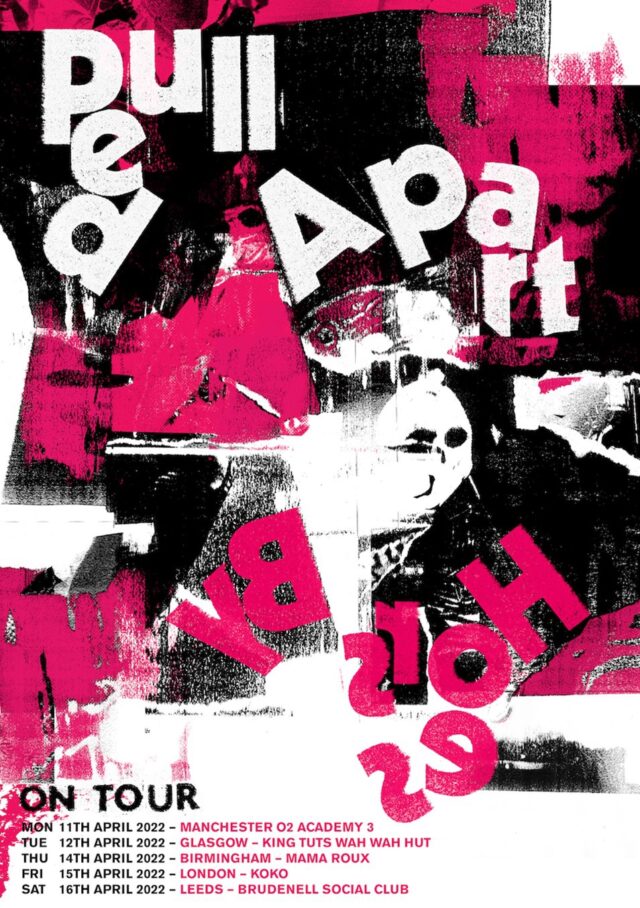 Leeds-based rock quartet PULLED APART BY HORSES are pleased to announce a run of April 2022 UK headline tour dates, with tickets on presale to fans at 10am Wednesday 13th Oct 2021 and general sale from 10am Friday 15th Oct 2021.

The run includes a London headline date at Koko on Friday 15th April 2022.

The live news comes hot on the heels of the announcement of the band’s signing to Alcopop! Records for the release of their long-awaited fifth studio album in Spring 2022, with further details to be revealed over the coming months.

The album’s lead single ‘First World Problems’ is out now, with the track already picking up its first few spins at radio from Huw Stephens at BBC 6music and John Kennedy at Radio X and a swathe of support from NME, DORK, UPSET, GIGWISE, DSCVRD and many more.

‘First World Problems’ is as lyrically relevant now as it was when it was written (pre-COVID) and is pretty much ‘what you hear is what you get’, as vocalist Tom Hudson explains it as, “a voiced frustration towards our groomed, individualist society, where the real world and our online world is full of constant venting of minor/trivial annoyances as if they are the centre of the universe, when really there are more pressing matters out there and a far bigger picture.”

Serving as the sonic blueprint for the next PABH chapter, ‘First World Problems’ was inspired by late ‘70s garage rock, post-punk, and heavy weight rockers like Iggy And The Stooges, The Rolling Stones, Bowie and The Cramps.

With the trials and tribulations of their critically acclaimed fourth album The Haze behind them, Pulled Apart By Horses have emphatically returned, and are approaching 2021 with fresh perspectives, open minds, and a flurry of creativity—writing new songs, defining their sound, and wrestling back control of their own artistic process.

Further details of the band’s long-awaited fifth album will follow over the coming months.