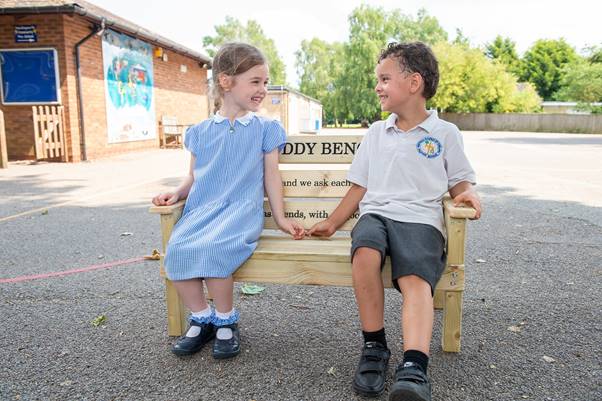 Close to the developer’s Needingworth Park development, the school received the bench, inscribed with ‘We sit, we chat and ask each other questions. We leave as friends, with all good intentions’, for children to use when they need to talk to someone.

World Friendship Day was announced in 2011 by the UN General Assembly with the idea that friendship between people, countries, cultures and individuals can inspire peace and build communities.

Paul Baddeley, Headteacher at Holywell CofE Primary School, said: “Friendship and compassion are two of our key values at school and we are grateful for the donation of this bench. We think that it will really help the children to actively support this principle in school.”

The concept behind the friendship bench is if a child feels lonely, they can go to the bench as a signal that they need someone to play with. The idea is that other children will then go and talk to them and include them in their games.

Jason Hearn, Sales Director at David Wilson Homes South Midlands, said: “Making friends at school can be challenging for many children, which can have an impact on their mental health. Also, the pandemic has only made this harder as they have had less opportunity to socialise with their friends.

“We therefore hope that by donating a friendship bench, children at Holywell CofE Primary School will have the chance to talk openly to each other about their feelings, and make new friends.”