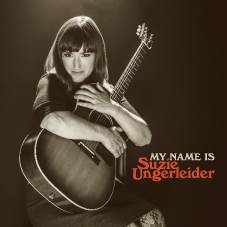 Two-time Canadian Juno Award nominee Suzie Ungerleider releases the second single, titled ‘Mount Royal’, from her upcoming 10th studio album. The album My Name Is Suzie Ungerleider, due August 13th 2021, officially opens a new chapter of her already distinguished and highly successful career, being the first release since the artist formerly known as Oh Susanna announced that she would now record and perform under her birth name.

‘Mount Royal’, following on from the single ‘Baby Blues’, is a characteristic folky Americana tune with roots influences that follows another personal tale from the chronicles of Suzie’s life, “It’s a romantic song about my time in Montreal when I was just at the end of my teenage years. I had never lived away from home and here I was thousands of miles from where I had grown up. I was still in Canada but I felt like such a foreigner in this French-speaking city.”

The atmospheric and haunting instrumentals frame Suzie’s cinematic lyrics, spinning a tale of colourful young characters dealing with their insecurities, “My roommate Zoe was beautiful and tough with a mane of black curly hair, always playing pool at Bar St. Laurent with a cigarette in her mouth. She was emblematic of how we were all trying to pretend we were in control. Meanwhile I was longing for love and a life in music, but feeling so alone and unable to get there. All the people I knew were trying to act cool yet grappling with impending adulthood and our place in the world, “Who in the hell do we think we are? Shooting for the moon and the stars.”

Bursting with trademark evocative melodies and trenchant lyrics, My Name Is Suzie Ungerleider is the tenth solo studio album by the American-born, Canadian-raised artist revered for such landmark records as Johnstown, Sleepy Little Sailor and A Girl in Teen City. Now based once more in her hometown of Vancouver, the album was made with producer Jim Bryson, whose assured touch amplifies the atmospheric dreamscapes contained in Suzie’s reflective, intimate songbook.

The decision to say “so long” to her long-time moniker Oh Susanna represents her recognition that the “exciting, dark, funny, charming” character that she thought was Oh Susanna was actually Suzie Ungerleider all along. “So here I am, leaving behind the trappings of a persona that gave me the courage to climb up onstage and reveal what is in my heart,” she reflects. “It once protected me, but I need to take it off so I can be all of who I am.”

The name change is both a personal and political decision, fuelled by her realisation that ‘Oh Susanna,’ the Stephen Foster song of 1848, contained racist imagery and a belief system that she wanted no part of. She came to understand its historic associations to Minstrelsy, a tradition both demeaning and dehumanising to black people. Leaving Oh Susanna behind, she’s become her true self with a wonderful record that marks a fresh beginning, a collection of new compositions that refresh and redefine who Suzie Ungerleider is.

The new album is introduced by the characteristically searing ‘Baby Blues,’ a song about how the traumatic events we witness when we’re young can haunt and indeed shape our older selves. It’s a deep subject with an upbeat punchline. “Like ghosts,” she says, “sometimes you just need to just sit with them, feel their power, and, because they feel seen, they release their hold on you for a little while.” Elsewhere, the album depicts an older and wiser artist and mother sometimes writing for her daughter, both at the time of her dramatically premature birth and miraculous survival on the achingly pretty ‘Summerbaby’ and, now a teenager herself, courageously dealing with her own identity on the intimate ‘Hearts,’ on which mountains of blue watch over her.

‘Baby Blues’ was accompanied by a stunning hand animated music video from fellow Canadian creative Christine Fellows. The labour-intensive video was created by cutting up hundreds of individual images in an animated collage that beautifully interprets the lyrical themes of the song, which Christine says offers, “a unique way of connecting with the songs underlining elements of rhythm, lyrics, and dynamics, taking the song apart and putting it back together from a visual perspective. It gives us an opportunity for a deep listen. It’s also really fun. I’m so grateful for the opportunity to spend time with Baby Blues. It’s a perfect song. I hope you love it as much as I do.”