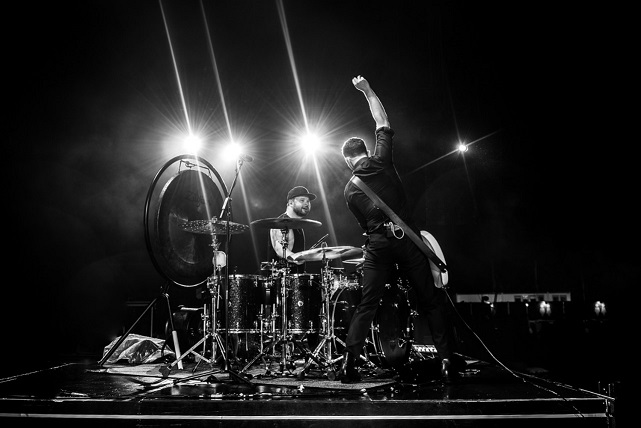 Royal Blood – Mike Kerr (vocals/bass) and Ben Thatcher (drums) – will be heading out on a huge 2022 UK arena tour. It includes their biggest headline show to date at London’s The O2 and represents their first full UK tour since 2017, when they sold-out three consecutive nights at London’s Alexandra Palace. Royal Blood will be joined by special guests, The Amazons.

Royal Blood commented, “Playing live is the DNA and sole purpose of our band. On stage with our fans is where we belong, and we cannot wait for this tour to be a reality!”

From ‘Trouble’s Coming’ to ‘Boilermaker’, Royal Blood’s recent releases are making a phenomenal impact. After three consecutive Hottest Records courtesy of Annie Mac at Radio 1, another 50 million streams and the biggest North American airplay of their career. The band have just released their third album ‘Typhoons’ which is set to make the duo bigger than ever before and is currently outselling the rest of the Top Five in this week’s race for the top of the Official UK Albums Chart.

The Amazons are one of the UK’s most exciting bands and have two Top 10 albums under their belt. Their 2017 self-titled debut album reached heights of #8 in the official chart and the release of ‘Future Dust’ in 2019 then lead to two prominent singles ‘Doubt It’ and ‘Mother’ hitting the Radio 1 A-List. Performing and selling out venues across the world, the band will join Royal Blood on all dates. Tickets will go on general sale here from 9am on Friday, May 7th.

When Royal Blood sat down to talk about making a new album, they knew what they wanted to achieve. It involved a conscious return to their roots, back when they had made music that was influenced by Daft Punk, Justice, and Philippe Zdar of Cassius. It also called for a similar back-to-basics approach to what had made their self-titled debut album so thrilling, visceral and original. That cocktail of energy and invention resonates throughout their four recent tracks.

‘Typhoons’ heralds an exciting new era for Royal Blood, who are firmly established as one of rock’s biggest and most vital bands. Their previous two albums both went straight to #1 in the UK, in the process accumulating 2 million global sales. The duo have won the BRIT Award for Best British Group, two NME Awards and a Kerrang! Award. Their debut album was also nominated for the Mercury Prize.