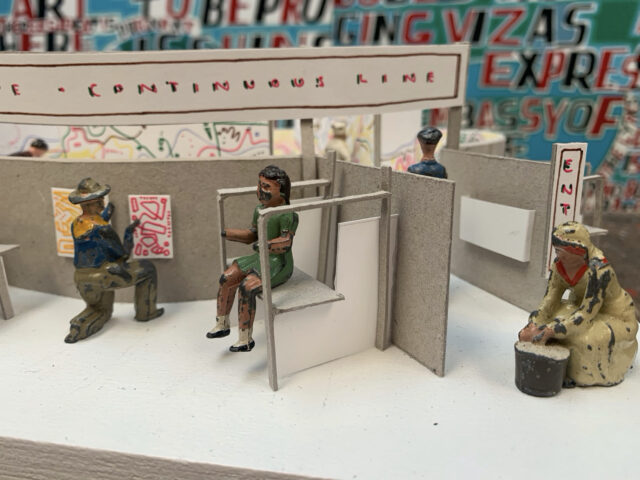 Estuary 2021 is a large-scale live and online arts festival which will see over 90 works and events presented in outdoor locations across Essex and Kent, from Shoeburyness to Tilbury, from Gravesend to Margate; including Wat Tyler Country Park, Pitsea and Southend on Sea in Essex: The programme extends from the most easterly points of the Thames as it merges with the North Sea, and into London, with programme at Lesnes Abbey Woods.

Art in the landscape

• Nadav Kander’s In The End Is The Beginning – Towards The Thames Estuary, is an outdoor installation featuring a triptych from his on-going photographic series, Dark Line – The Thames Estuary, writ large on an abandoned jetty in the landscape it portrays at Shoeburyness. A static representation of the constants of the river placed at one of its most sparsely populated points, Kander’s images consider the passing of time and the rich histories of life, wealth, population and politics connected to the estuary.

• Sound Mirrors by artist duo Dot Dash (James Wilkes and Laurence Bradby) is a trail of sound portraits specific to their locations at Southend’s Chalkwell Park, East Beach in Shoeburyness, Wallasea Island, Jaywick Martello Tower, Naze Tower and Harwich Green. Accessed via QR codes hidden as geocaches at each point, the works are based on recorded community voices as they reflect on the personal relationship between locality, sound and emotion. The six geocaches form the Essex leg of the world’s first Art GeoTour, created as part of England’s Creative Coast.

• Waiting for Climate Change is an outdoor installation by Isaac Cordal sited in the estuary itself on Chalkwell Beach. The Spanish street artist will create a series of 15 characters, visible at low and high tide, readily equipped with mobile phones and diving equipment. Prepared for an emergency, the characters seem to absently look on as the water level rises and the tide comes in. In a challenge to our often-passive relationship with climate change, Cordal hopes to spark discussions around the climate emergency and the risk presented by rising sea levels.

• Gabriella Hirst’s An English Garden will be presented at Estuary 2021 as part of her on-going project, How to Make a Bomb. It charts the artist’s attempts to propagate new specimens of the ‘Atom Bomb’ – a near-extinct species of garden rose, first registered in 1953. Since 2019, How to Make a Bomb has been curated by Warren Harper at The Old Waterworks (TOW), close to Foulness Island, where Britain’s first atomic devise was assembled. For the festival ‘Atom Bomb’ roses will be installed in a formal English Garden upriver from Foulness Island at the nature reserve and former MOD site, Gunners Park. An English Garden is intended to recognise the role of Essex in Britain’s nuclear colonial legacy, serving as a reminder that the red rose and the English garden are entangled with a violent past and dangerous present. The project is commissioned through a partnership between The Old Waterworks and Metal, with additional funding from Arts Council England Project Grants.

• Mirrors for Princes (2019) is a series of traditional pub style mirrors created by Ruth Ewan with sign writer Artisan Artworks that will be hosted by pubs along the Essex coastline of the estuary. The mirrors feature texts channelling the ancient call for social equality and justice and will be accompanied by an edition of slogan beer mats. The English expression ‘mirrors for princes’ refers to an ancient literary genre that outlined the basic principles of moral conduct for rulers. The quotes featured on Mirrors for Princes are derived from writings, texts and speeches by sources including the fourteenth-century radical itinerant priest John Ball (c.1338–1381), eighteenth-century proto-feminist philosopher Mary Wollstonecraft (1759–1797), and the nineteenth-century French anarcho-feminist Louise Michel (1830–1905). John Ball was a key figure in The Peasants’ Revolt of 1381, which was caused, among other things, by a rise in taxes (needed to finance the Hundred Years’ War against France). Sparked by the villagers in the Essex estuarine village of Fobbing, the rebels from across the southeast of England demanded a reduction of taxes, the end of serfdom and the resignation of the king’s chief advisers. Over time, this uprising has become a key moment in British history.
Online programme

Audiences can stream a mix of panel discussions, readings, artist presentations and films, and experience artworks commissioned specifically for the online space throughout the three weeks of Estuary 2021, all available for free at estuaryfestival.com.

• Estuary 2021’s newly announced film programme, The Telling Image is curated by Gareth Evans. It brings together ten short films from eight film-makers that consider the festival themes of climate, protest and rebellion and propose alternative ways of being in the world, arguing for new structures. The films include:
o Anja Kirschner’s Jarmanesque Polly II , part satirical sci-fi, part soap opera and part Brechtian ‘Lehrstueck ‘ portrays the lives of pirates and outcasts surviving in the flooded ruins of future East London
o Waste by emerging filmmaker, Hannah Oliver thinks in images about what waste is and what might be left, when everything is waste
o Sarah Wood & Ali Smith’s found footage essay film The Bravest Boat celebrates the legacy of Margaret Tait’s time in postwar Italy and the origin of her filmic vision
o Morgan Quaintance’s geographically resonant Early Years, a portrait of Jamaican-born artistic polymath Barbara Samuels
o Eelyn E Lee’s Casting Fu Manchu challenges racist casting stereotypes by inviting actors of east and southeast Asian heritage to audition for the role of the Chinese villain Dr Fu Manchu who has only ever been played on screen by white men.
o Gideon Mendel’s lament for a scorched Australian National Park in A Song for the Forest
o Stanley Schtinter’s John on the Void providing the striking insights of acclaimed artist John Akomfrah on a French Polynesian voyage
o Three films by US filmmaker Jem Cohen – This Climate, Bella Ciao and The Militant Ecologist – which bring together music, resistance and extremes of consumption
Talks
• Launching as part of Estuary 2021 and Hay Festival is the inaugural Jan Morris lecture, a co-commission that celebrates the life and work of the acclaimed historian, nature and travel writer, who died last year. Jini Reddy, author of Wanderland: A Search for Magic in the Landscape, will look at non-orthodox perspectives on the landscape, and consider the richness and wisdom they bring. The lecture will be broadcast simultaneously across both festival websites at 1pm on Thursday 27 May.
• An Unknown Earth (a title taken from Conrad’s Heart of Darkness) is the festival’s Opening Weekend of live broadcast discussion and specially commissioned online artworks exploring climate, rebellion and imperial legacy. The event will be brought together by four artists and curators all of whom know the estuary as home: Jas Dhillon, Elsa James, James Marriott, and Lu Williams