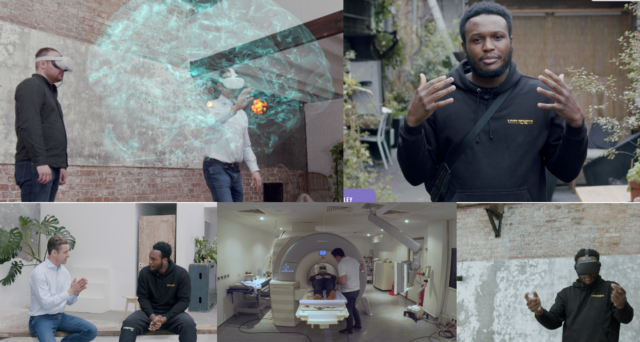 GamCare, which operates the National Gambling Helpline, is warning of the ‘imminent need’ to talk to young people about gambling risks, amidst more than 7 in 10 (71.5%) calls to the helpline from under-18s being from those experiencing a gambling issue.

GamCare’s ‘BigDeal’ website is the dedicated hub for young people where they can find information, advice and support if they’re concerned about themselves or a loved ones gambling. ‘BigDeal’ also offers support to parents and training to those who work with young people, such as teachers, youth workers and social workers.

To highlight the impact of gambling on a young person’s brain development, GamCare invited Rhys, whose friend lost thousands of pounds gambling during a long-term gambling addiction, to go inside his own brain (scanned using MRI while betting on an online roulette table) using a custom-built virtual reality world. This awe-inspiring experience helped him to see, with his own eyes, exactly what happens in our brains when we gamble and, in particular, the processes involved in driving his friend’s addiction.

In the video, Boxer and Youtuber Viddal Riley and Dr Jack Lewis discuss how the reward pathway, located in one of the oldest, central parts of the human brain, is responsible for driving all our decisions. They look at how regular gambling causes changes in its wiring to encourage more frequent betting and higher stakes despite the heavy losses.

Neuroscientist Dr Jack Lewis, who scanned Rhys’s brain and presented the VR film, explains more. He said: “When you place a bet, the part of the brain that’s most interested are three interconnected areas that make up the core of the reward pathway. The reward pathway is instrumental to every decisions we humans make whether deciding what we want for dinner or what kind of bet is most likely to give us a win.

“In the context of gambling, the trouble starts when a certain type of loss causes the reward pathway to become more active rather than less. The culprits are “near misses” – situations where your bet doesn’t come in, but it feels like a close call. A last minute equaliser in a football match or leading horse taking a fall in the final furlong often means a loss of money to the gambler – but the excitement these “near misses” generate in the outer reaches of the reward pathway nonetheless makes people come back again and again.

“Teenagers are much more vulnerable to developing addictive behaviours due to natural increases in dopamine sensitivity in the reward pathway at this stage of their development. This increases their appetite for taking risks and that’s why it’s illegal to gamble until you are 18.”

Boxer and Youtuber Viddal Riley, 23, has backed ‘Big Deal’ and recognises the importance of getting information out to young people so they understand support is available. He said: “Young people need more support to be educated on what they can do when gambling can harmful, knowing when things aren’t OK or being aware of what could happen down the line.”

“As a boxer, I know betting is a big part of my sport, and watching a match is often a family moment. And as a Youtuber, I know young people spend a lot of time online and it can easily lead to things getting out of control.

“It’s really important that young people have the resources and support to be educated in the choices they make. I hope young people search BigDeal online to help them make that that call – whether it’s for themselves, a friend or parent.”

Anna Hemmings, CEO of GamCare, said: “Since lockdown, we’ve not only heard stories from our helpline that reveal young people are increasingly experiencing more parental gambling but there is also rising concern for potential harms to young people who gamble themselves.

“It’s been an extremely difficult year for young people, with many using the internet and social media not only to be in touch with friends, but also as a form of escapism. This makes it harder for parents to tell when their child might be displaying unhealthy behaviours, as often the symptoms, such as being withdrawn, can be confused with other issues and challenges teenagers face in this difficult period of their lives.

“That’s why we hope BigDeal will be a resource that speaks to young people in plain terms on the core issues related to gambling, the harms they could encounter, plus how they can get further support from our helpline.”

Rising concerns have also been raised about young people gambling online through esports betting and so-called ‘social gaming’ that risks sky-high spending limits, in-app purchases and skins betting, which involves buying, selling and exchanging items with other players, and loot boxes, with GamCare data pointing to a lack of awareness among young people regarding how to access support.