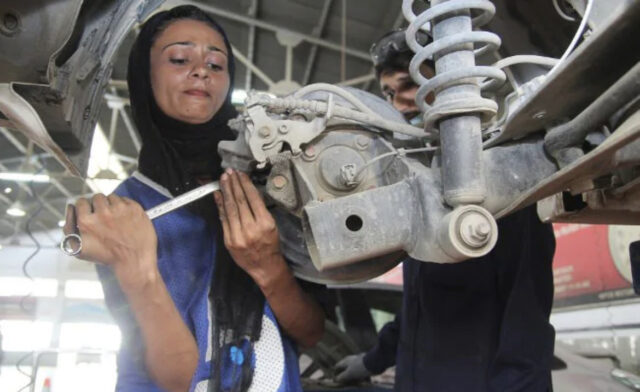 Of all the negative and thoroughly dated stereotypes out there, “women drivers” has to be one of the biggest. The claim that women aren’t as accomplished behind the wheel as men is hopefully one that most of us have dismissed by now and, if new data is anything to go by, we certainly should have done.

That’s because, according to survey results from a study by luxury car dealers, Jardine Motors, women on average tend to know more about what’s under the bonnet of their cars than men. Based on questions similar to what would be asked in the “show me, tell me” part of a UK practical driving test, it appears that girls are not only smashing that stereotype, butmaking us wonder whether we should be bemoaning “men drivers” after all.

Before we get into where women drivers are showing their male counterparts up, you may well be wondering what on earth “show me, tell me” is. If you have ever done a practical driving test (after 2003), you will have taken part in “show me, tell me” – you just probably didn’t know it was called that.

“Show me, tell me” represents the very opening of your driving test where your examiner will ask you two safety and maintenance related questions from a possible 19. One of those questions will ask you to “show” the examiner something, like how to check the indicators are working, while the other will require you to “tell” the examiner something, such as how you would check the windscreen washer level. Get one or both wrong, and you’ll incur a minor fault on your test report.

The Jardine Motors survey quizzed 1,000 UK drivers on their car maintenance knowledge and the results were very interesting to say the least.

The girls beat the boys

While the study revealed a number of eye-opening statistics to do with our collective knowledge – or, more specifically, collective lack of knowledge – on basic car maintenance, arguably the most interesting findings came in the knowledge breakdown between the genders.

With regard to the various safety checks the “show me, tell me” test covers, the study revealed that 56% of men were unable to carry out all of the safety checks involved, compared to only 47% of women. Women also generally displayed a better knowledge of what was going on under the bonnet with the following numbers:

Some other interesting findings

The female domination of the findings was just one of a selection of interesting finds from the study.

Geographically speaking, Edinburgh topped the charts as the place with the most confused drivers, with 60% of respondents from the city incorrect in their maintenance check knowledge. At the other end of the table, it appears Bristolians are the most competent under the hood, with 68% getting their safety questions right.

On a wider scale, it seems most of us aren’t too well clued in how to look after our cars, with the following statistics coming from the study:

With numbers like those above, it would seem plenty of drivers need to scrub up on the car safety and maintenance knowledge. One thing that’s clear, however, is “women drivers” aren’t the ones who need to do the most work.