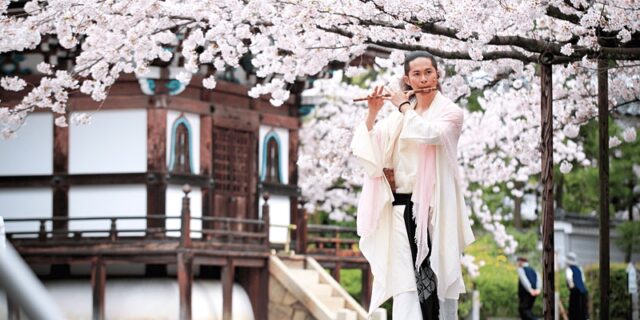 Shinobue flute in a historic location
For the first time in four years Honpō-ji Temple will be hosting a springtime concert, welcoming professional Japanese flute player Kazuya Sato for an intimate performance.

The event will be a rare chance to take a look at Honpō-ji Temple as the seasons turn, a setting which perfectly complements the traditional Shinobue bamboo flute which Kazuya Sato will be playing.

About the Location
Based in the Nara prefecture of Japan, Honpō-ji Temple was founded more than 600 years ago. The Temple is home to a number of carefully preserved Japanese artworks, some of which are hundreds of years old. Stepping out to the grounds, visitors will find traditional gardens which will soon be bursting into colour as cherry blossom season spreads through the country.

About the Artist
Kazuya Sato is a multi-instrumentalist and composer whose work includes an award winning composition for NHK TV Drama and a performance at a UNESCO World Heritage Site for a Buddhist ceremony. Although Sato has experience with a wide range of instruments and style of music, he has specialised in performing with the Shinobue flute since graduating university.

Also known as a Takebue, this centuries old instrument has long been a key component of artistic events such as Noh and Kabuki, ancient theatrical recitals at the heart of Japanese culture.

About the Concert
This April, a springtime musical event will be held on the grounds of Honpō-ji for the first time in about four years, as the Temple serves as the backdrop for an online shinobue performance. Reaching out beyond Japan, the spring concert will be streaming internationally with tickets available online.