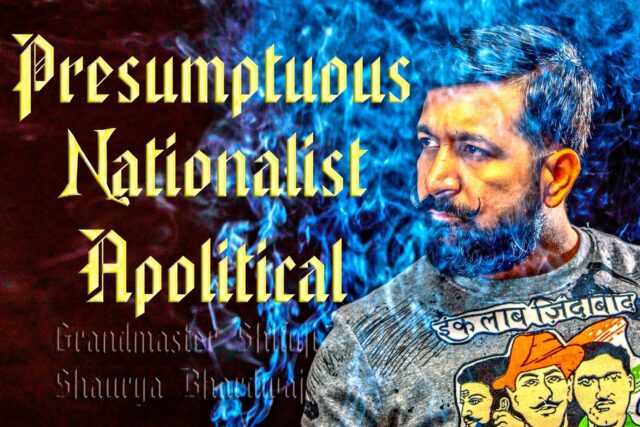 Grandmaster Shifuji Shaurya Bhardwaj has always been in the news mainly for his bold Nationalists, Straight presumptuous APOLITICAL remarks. He is known to spread Staunch Patriotism through his videos and mass public speeches. He is respected and regarded worldwide by the Experts and Legends of Counter-Terrorism, Counter-Insurgency but why is he being defamed in India. His news coverages and controversy are back again in the market from the first day of the Year 2021. It became a matter of research, observation, and detailed Analysis for our team. Grand Master Shifuji is continuously viral, trolled, and hated online with many Harsh comments, sometimes baseless with online violence.

Is Shifuji a Fake, Fraud? Is Grandmaster Shifuji Shaurya Bhardwaj Fake, Fraud or A genuine commandos Mentor and a true Nationalist?

Allegations Vs. Reality as per closure reports-

He is regularly accused of donning a military dress,

along with a maroon beret, Marcos badge and balidan insignia, often addressed as an army officer by his fans and critics alike, his credentials as a freelance trainer and freelance commandos mentor to the special forces and armed forces have been questioned. Few communists and Leftist led media houses and a few suspected anti-national elements question his patriotism and even have the guts to ask him about his contribution to youth, women empowerment, and the Nation. 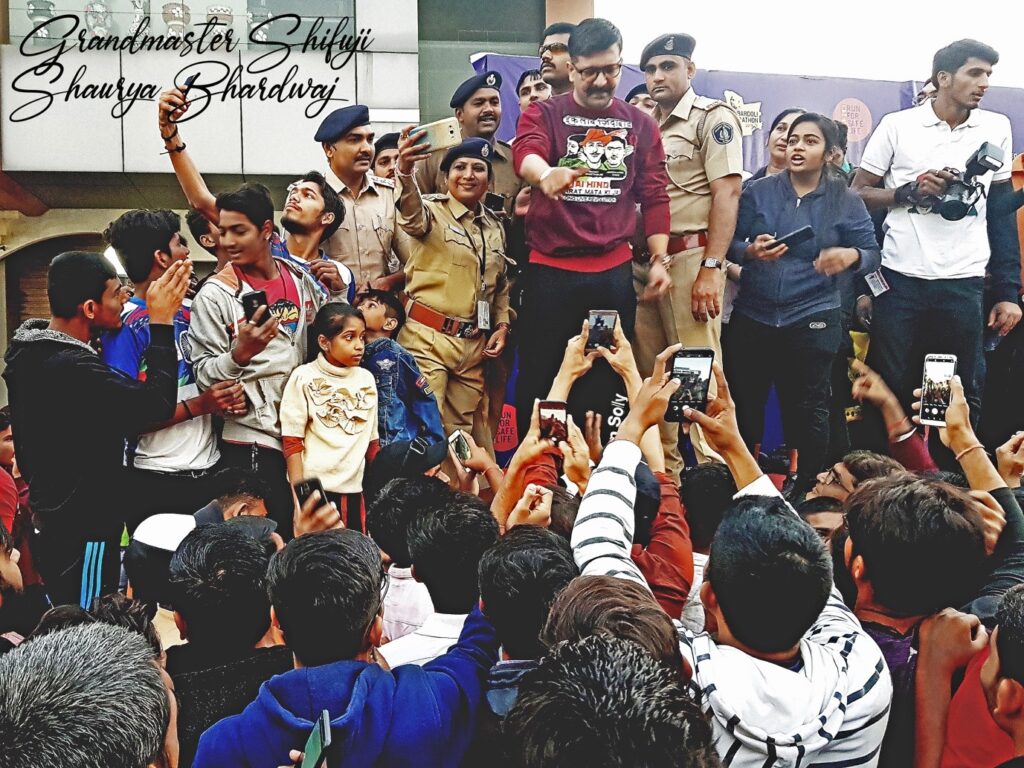 Has Grandmaster Shifuji Shaurya Bhardwaj ever claimed to be an Army officer, Armed Forces Personnel, A Special Forces Commando, A war hero, Army Veteran or any similar claim?

What is the issue of Grandmaster Shifuji’s so blamed fake military uniform?

The Final Investigation revealed that Shifuji’s maroon beret is designed similar to the elite forces’ ones. The beret Shifuji wore NO marks of the Indian armed forces, Indian special forces or the Indian government. Stating further, he is accused of wearing the Balidan Badge, which is awarded to a rare few. It’s not true! Be noted that the badge worn by Shifuji, is a pattern akin to badges of military ranks and combatants in another part of the world (not in India), and available online for everyone, this badge is worn without any restraint. He wore it printed on a camouflage t-shirt that is not a print of Indian armed forces nor does it contain any Indian Special Forces mark. The badge worn by Shifuji alleged to be the MARCOS badge. Still, He never worn in complete military, Indian Navy attire or even the jacket worn by Shifuji bore a cutout sticker of legendary revolutionary Martyr Bhagat Singh, which is not a protocol the Indian Armed Forces. 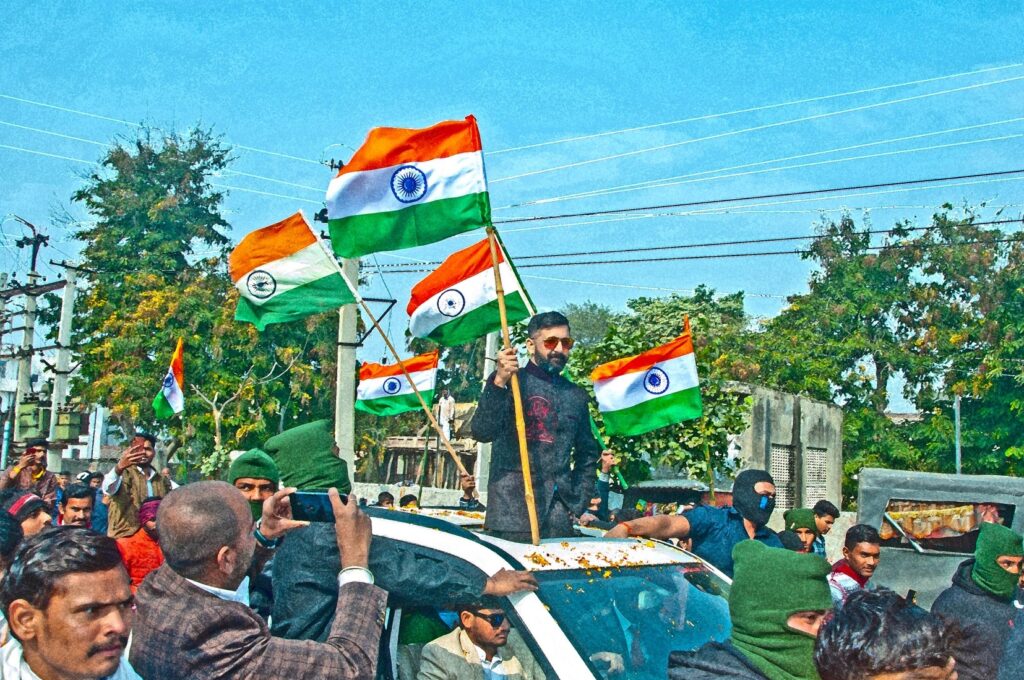 Is Shifuji a threat to Nation, or He has become a threat to Every Anti Nationalist and Traitor within India?

Why has this controversy arisen again?

Analysis- The content written in these articles are Questionable and seems one-sided at first legal Analysis. Most of these articles, mentioned above, contained the material and information sought by following Sources-

Analysis and unknown truth of concern-

Suspense- Was R.T.I. reply furnished to the applicant against the L.A.W.?

Was this information part of the National Security Act,1980 and Official Secrets Act,1923?

Will the court pass the judgement against the officer in charge?

R.T.I. Expert’s Opinion: Particular R.T.I. answered on misleading baseless questions about Grandmaster Shifuji with Indian Navy. In 99.9% cases, any such R.T.I. is denied under section 8 of the R.T.I. act. 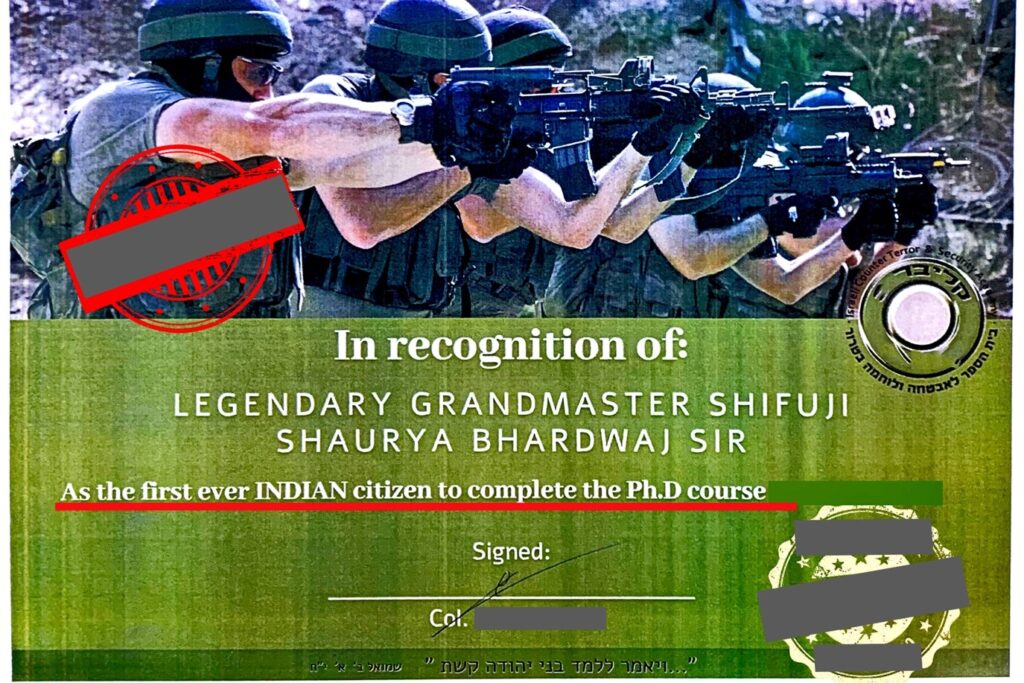 2- Second – Based on a girl and her friend’s written Complaint to the Indian Army Senior Officials or (PRO) at Delhi Headquarters in the Year 2016-17.

This girl and her friend (male) lodged complainant against Grandmaster Shifuji Shaurya Bhardwaj.

Analysis and unknown truth of concern-

Suspense- 1- Why were these two complainants so concerned about the TRAINING details of Indian Special Forces and freelance assistance providers of Indian Armed Forces? 2- Why all this training related investigation after URI Attack, especially when Grandmaster Shifuji took on the Traitors gangs and Left-wing extremists in his most viral videos. 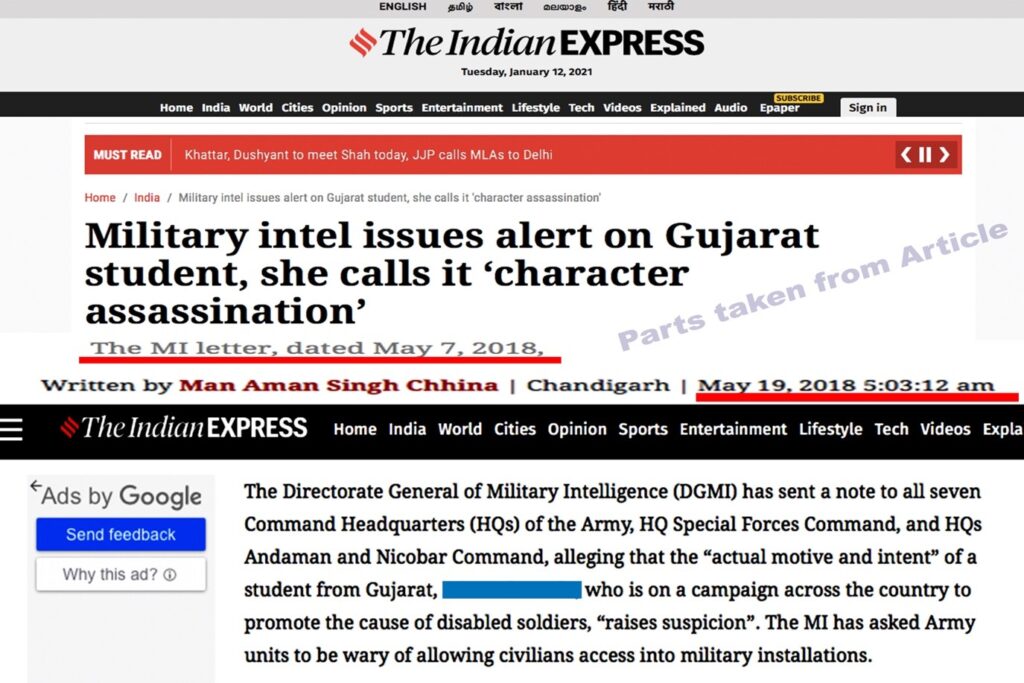 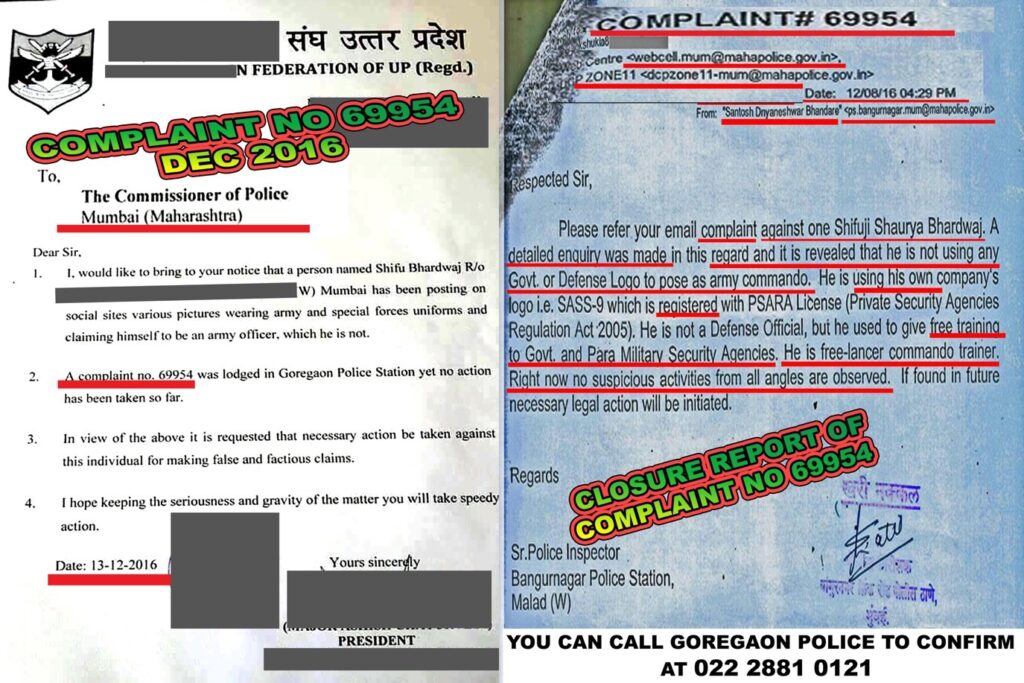 3- Three– Based on Individual’s complaint letter to the Police Commissioner of Mumbai, Maharashtra, dated- 13/12/2016 by A Letter from UP.

Claim Source- This Person circulated a complaint letter on social media in December 2016.

Suspense- 1. Why did this person write a special direct letter to Commissioner of Mumbai Police only against master Shifuji?

5.Why was only shifuji shaurya Bhardwaj became a national threat for this person and not the topmost criminals of India and most wanted terrorist.

Analysis and unknown truth of concern and

Why This this Individual using his writing pad of ex-servicemen, while addressing his so-called Complaint. Suppose, This Individual has any proof, why he has not presented himself before enquiry. In this country, everyone has an obligation and right to give his assistance in Nation-building. Indian Armed Forces are not someone’s private property. It is Off and for whole Nation and its Citizen. Grandmaster Shifuji also has rights to assist them, irrespective of the case as to whether he is asked on invitation or he wishes to.

Why is it bothering people? The problem is only for those who were earning money on workshop in the garb of training and felt threatened as it was being provided “free of cost” by Grandmaster Shifuji, So How to stop and effect that effort false propaganda. Since some politician executive and opportunist were waiting, the best plan for them was to defame him. The better way was through Army personnel. And to execute their plan, they initially tried to show everyone that he is ex-Army personnel and then declared him fake and took his get up as an advantage. Shifuji has a massive fan following, and this fake Complaint shared to defame him. None has any proof for such nuisance but as you know our Social media. Once it began, people started the following thread. However, Grandmaster Shifuji has never given heed to such trolls. It is also true that these chaps were calling to places wherever he was on a visit to defame. As per Grandmaster Shifuji’s reaction, He neither seem to bothers nor will in future. 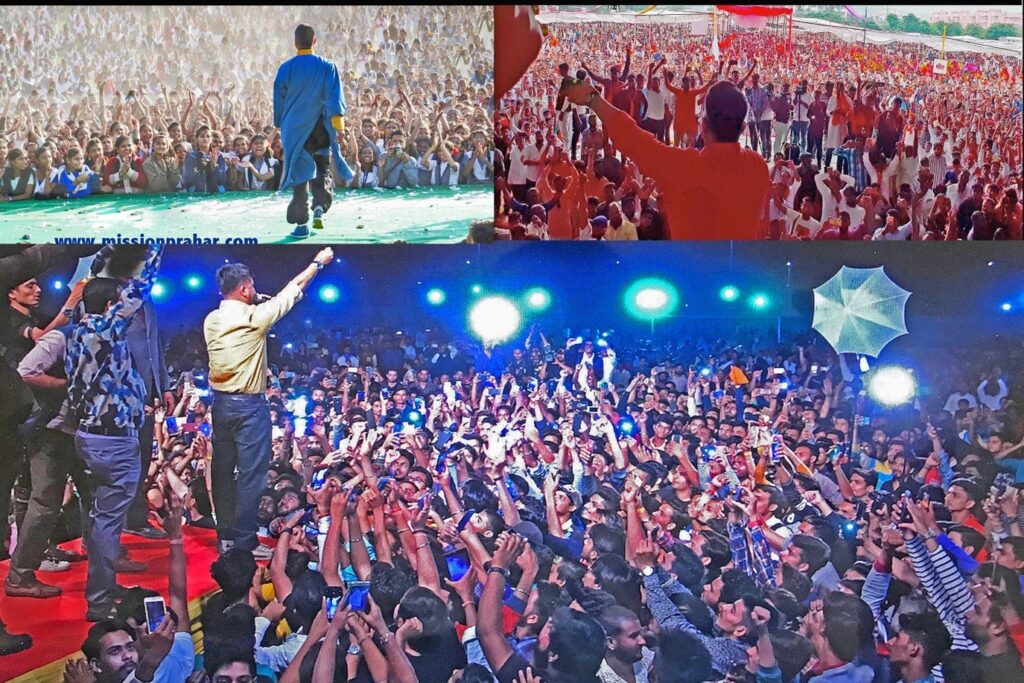 Let’s understand the meaning of words, Fake and Fraud.

Fake means- A thing that is not genuine; a forgery or sham” Answer– Grandmaster Shifuji is a complete genuine Freelance Commandos Mentor and Not fake, Not a single evidence of an unlawful and Illegal act found in this most detailed investigation.

Answer: Approximately 50 complaints lodges against Grandmaster Shifuji in 2016-17 and all have been disposed of after the most professional detailed enquiries by state crime branches and central investigating agencies.

The reality of F.I.R. by A Retired Army officer-  Q- How many Complaints and F.I.R. registered against Grandmaster Shifuji since 2015-16? What is Present status of Complaints, F.I.R.s against Master Shifuji?

Present Status: Closed on the 12/08/2016. An Official reply sent to the complainant which he NEVER shared to all of us and misled everyone.

3- 17 complaints to the Ministry of Home Affairs.

ALL CLOSED, or else Shifuji would have been arrested in 4 years. All complaints Closed after Investigation. All Proofs are attached here- 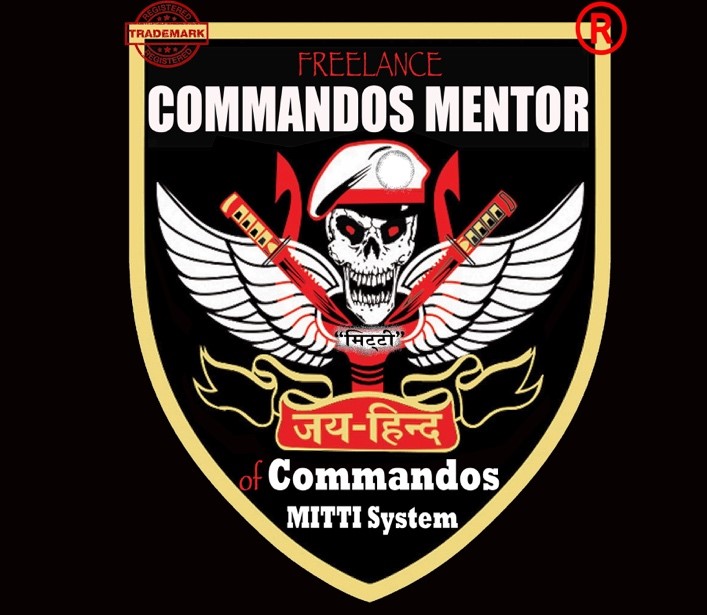 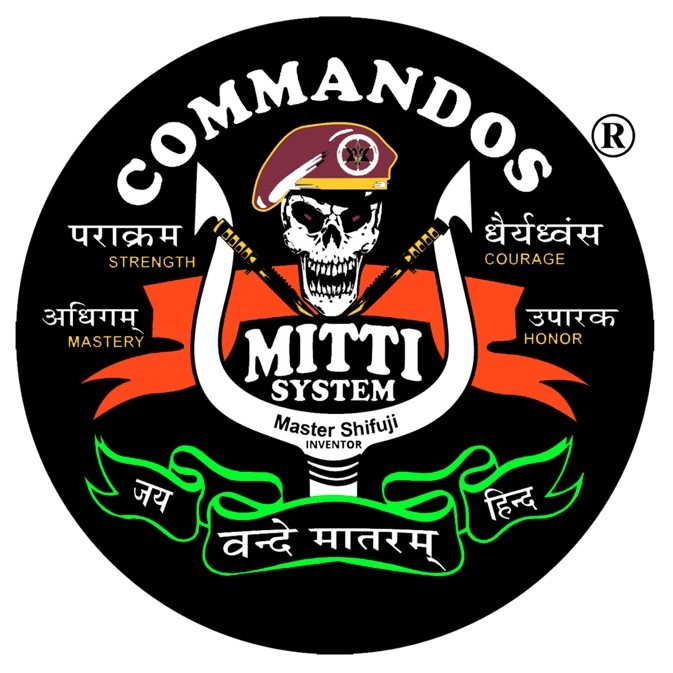 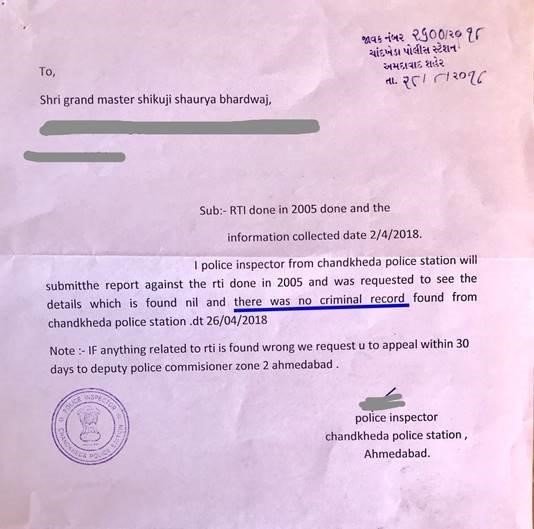 What is The Actual Reality of Grandmaster Shifuji Shaurya Bhardwaj?

Answer: The Journalist at this portal believes in Grandmaster Shifuji Shaurya Bhardwaj’s Integrity. He is one of the most significant Freelance Commandos Mentor in the world of Counter-Insurgency, Counter-Terrorism and Urban Armed combat. As per the acknowledgements and searches reports He is considered the “World’s Best Commandos Mentor” and “World’s Best Commando Trainer”.

It is left to your wisdom to decide who is right in this matter. Would you want to believe in this EXPOSED Propaganda of these so-called News Portals, making money out of this controversy with all misleading old articles against Master Shifuji?

Would you believe at the Investigating agencies and authorities like Crimes Branches of State Police, Investigating Agencies of Central Government and Military Intelligence Agencies? 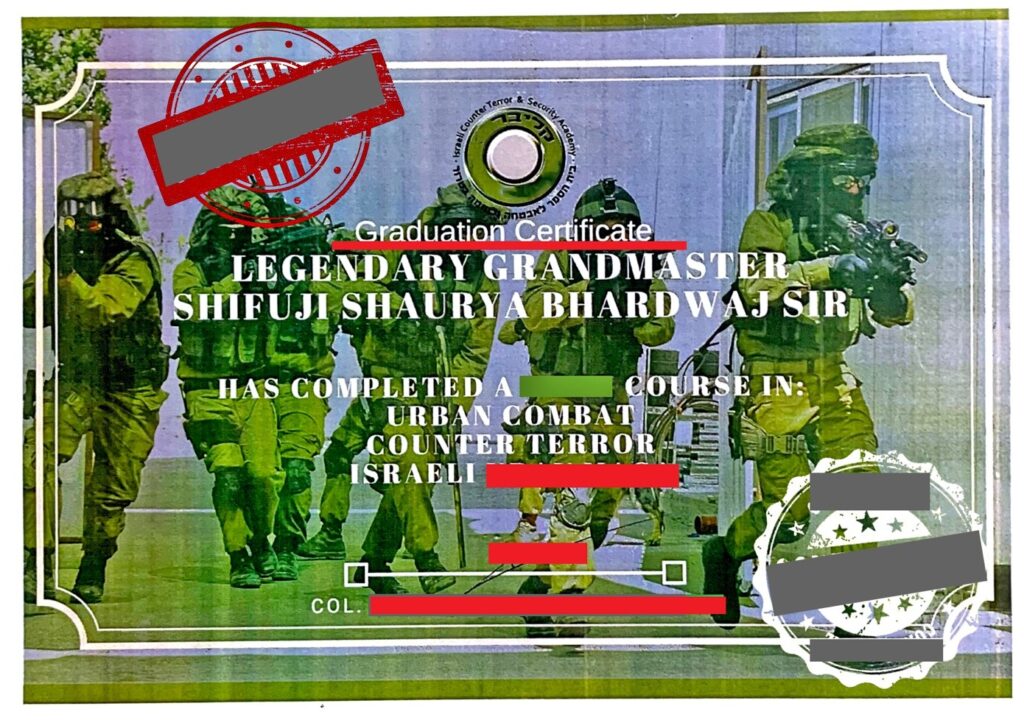 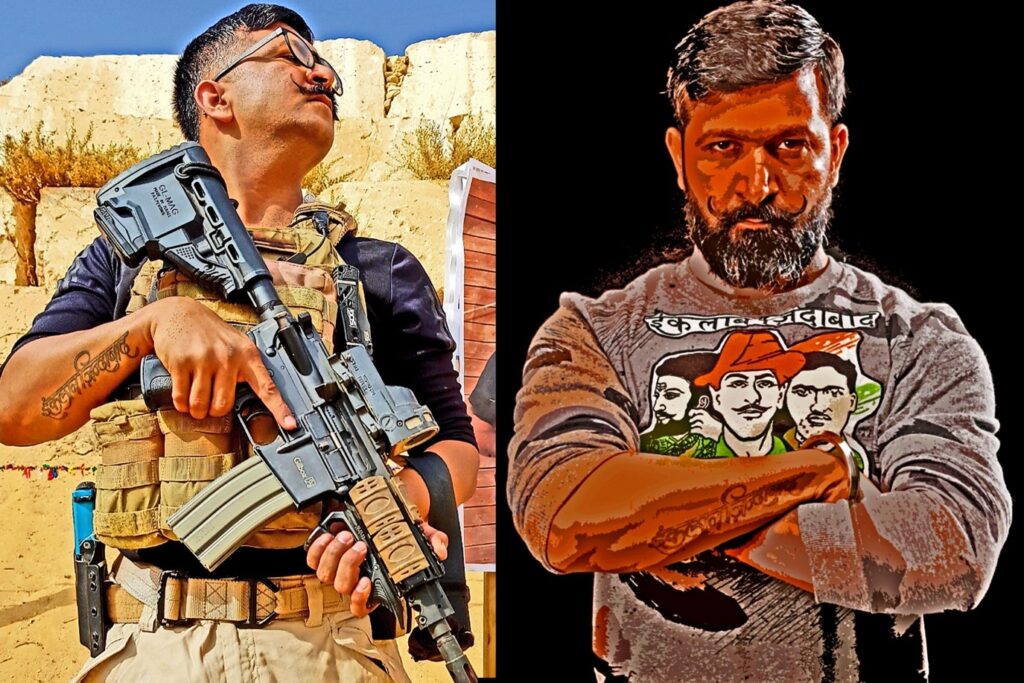 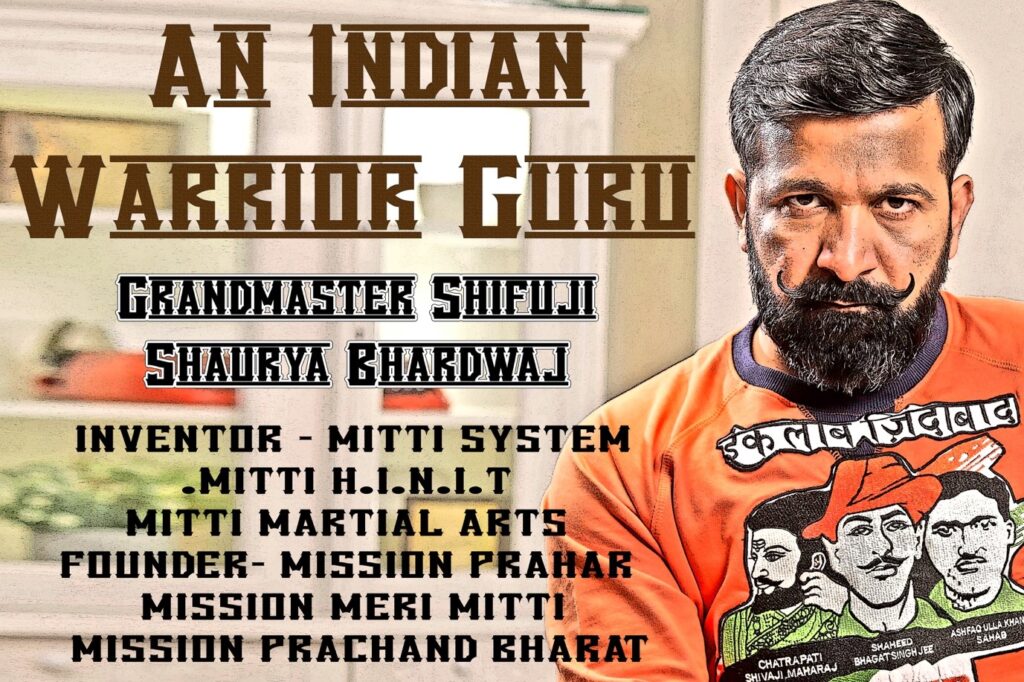 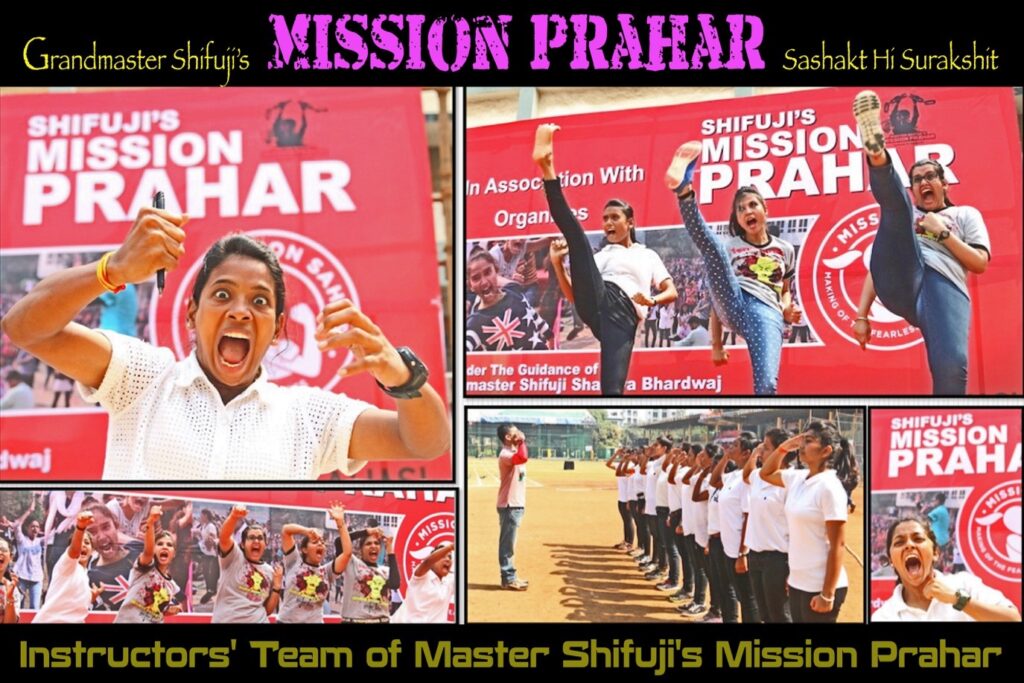 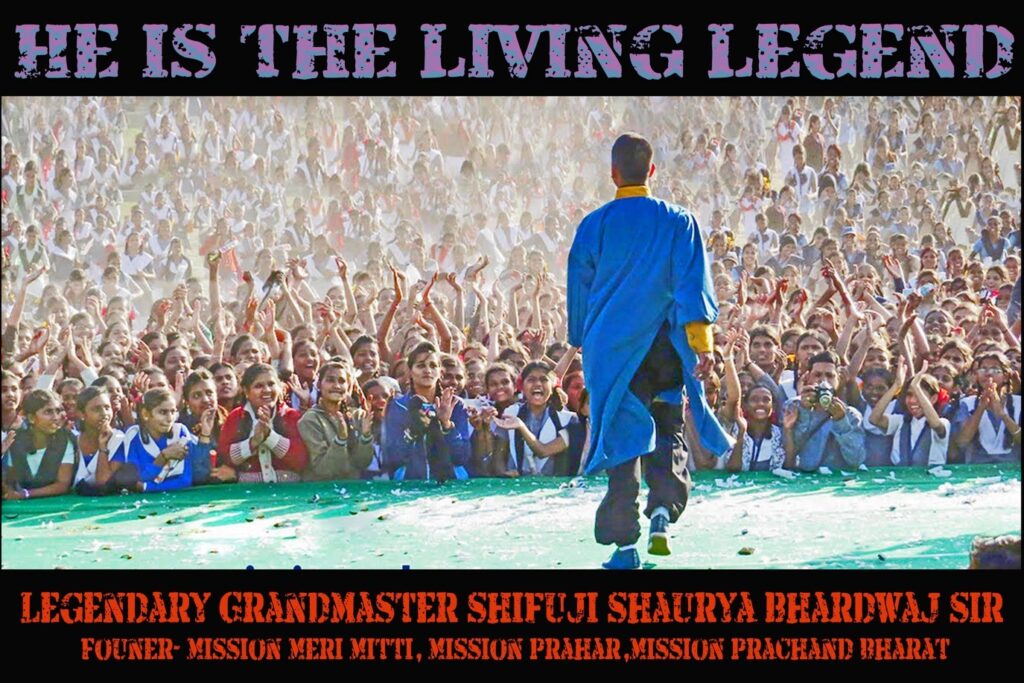 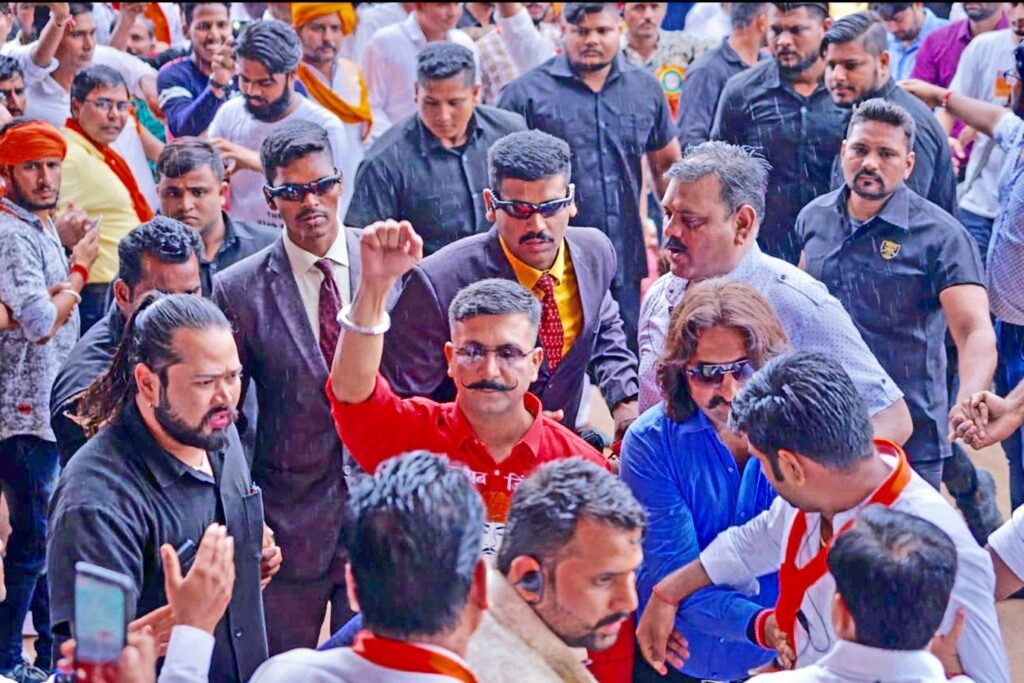 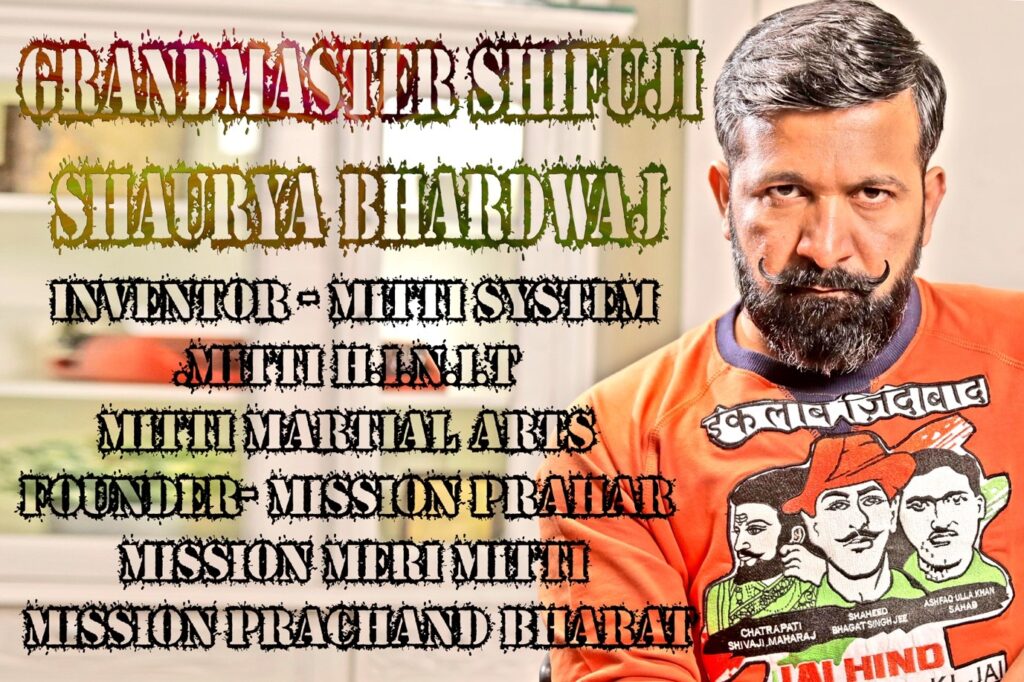