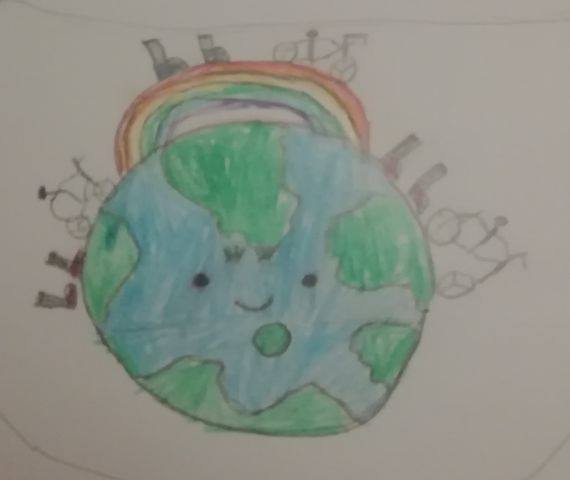 Face coverings remain key in the fight against Covid, so when 12-year-old Daniel Knight from Braintree spotted a competition to design a face covering back in September, he jumped at the chance to turn his passion for art into a one-of-a-kind face covering that his friends and family could wear.

The competition was run by Stop.Swap.GO!, a campaign developed by Essex County Council to encourage Essex residents to swap driving for more regular walking and cycling.

Residents must adhere to the relevant Tier restrictions for the area in which they live when leaving the house and currently must only do so for exceptional reasons, including daily exercise, as outlined in the latest Government guidance.

The lucky winner of the competition had their design turned into 20 face coverings, with the first 25 successful and eligible entrants receiving a Stop.Swap.GO! water bottle.

Daniel, who is now 13, said: “I drew a smiling globe with people walking and cycling around it because I wanted to show how getting some exercise in the fresh air can make people feel happy.

“I think it was a simple but effective design and chose to do it in pencil as that made it look more alive; just how walking or cycling can make you feel.

I will be keeping a handful of the 20 masks aside as a memory”.

She said, “The day we found out that Daniel had won, he was having a bad day as traffic jams meant that getting to and from school in Colchester was a challenge. It really did sum up the need for a campaign like Stop.Swap.GO! It also cheered him up no end”.

The Stop.Swap.GO! campaign was developed as a response to figures showing 10.7 billion vehicle kilometres were travelled in Essex in 2018*, with up to 43% of car trips in Essex districts being under 3 miles (the equivalent to a 15 minute cycle).

Government guidance currently states that people are permitted to leave home to exercise and anyone aged 13 or over can join in the challenge. If they record 60 consecutive days of walking or cycling they could be in for a chance of winning top prizes, including Love2Shop / Amazon e-vouchers and even the chance to win a bike and cycling or walking accessories to the value of £1,000.

The campaign has influenced Daniel to make a conscious effort to get some exercise, even asking his dad to drop him off for school several streets away so he can walk in.

“I really enjoy going for a cycle with my dad and older brother. We’re lucky that although we live in a fairly urban town, we are close to the countryside.

I also enjoy going for a run and walking my dog in the field out the back of our house. He is sometimes a little stubborn though and often refuses to walk!”

Cllr Ray Gooding, Essex County Council Cabinet Member for Passenger Transport, said: “We had lots of entries but particularly liked Daniel’s as the theme of walking and cycling around a happy globe fits with our message here at Stop.Swap.GO! perfectly!

As a council, we want to encourage residents to opt for more sustainable modes of transport when leaving the house for any of the reasons permitted within current Government guidance, and are hoping to make it more rewarding than ever with our Stop.Swap.GO! campaign”.

Residents can find out more about the current restrictions for where they live here: https://www.gov.uk/guidance/local-restriction-tiers-what-you-need-to-know