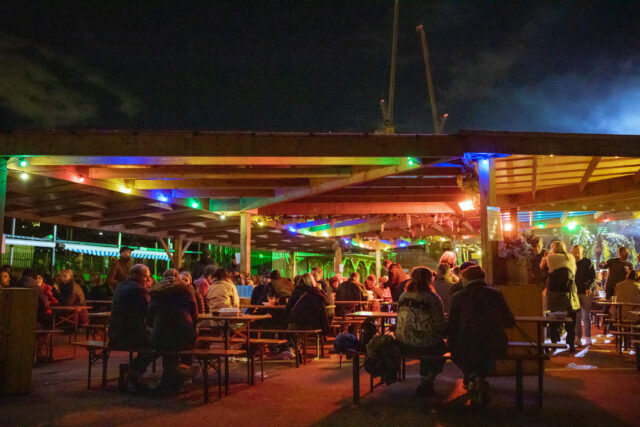 The Cause’s socially distanced concept Costa Del Tottenham flips from outdoors to indoors as the constantly evolving space transforms yet again offering London a unique new space to carry on the party safely yet again. The much-awaited Theatre space is now open (albeit but not in full party mode that we all hoped), partly funded by The Cause’s crowdfunder, forms half of the new indoor area, whilst a DIY heated conservatory-style structure on the terrace feeds off its shutters to expand capacity. With a few rare exceptions, Fridays and Saturday evenings are consistently priced at just £10 per head to cater for these tough times and represent the typical sounds The Cause is known for. DJs from the world of house, techno, disco, and garage showing their more eclectic sides and digging a bit deeper to compliment the more relaxed setting.

Costa Del Tottenham’s Northside Beer Hall, the cavernous tunnel like space that The Cause opened in July that takes over their neighbours’ yard will also be adapted for the change of weather. The sides will be sealed and heaters installed to create another distinctive space for events all year round.

Eugene Wild, co-founder of The Cause says “Despite everything, we are powering through, crossing our fingers every day that some light will appear at the end of the tunnel. We feel very, very lucky to be one of London’s only venues to have the space to do this and as such we aim to keep our doors open 7 days a week wherever possible to provide London with a truly underground, community space.”

Gerd Janson takes over next weekend (16th and 17th October) alongside hugely talented London selectors Running Hot and Kiwi, head honcho of the now cult and queer sex-positive party Crossbreed. Steve Lawler and Darius Syrossian also play back to back this Sunday (11th October), something you’d rarely see in such an intimate setting.

Drum & Bass Allstars, Jungle Splash and Rebel Clash also takeover various Sundays and Mondays as the space becomes the number one place for the drum and bass community over lockdown.

The Cause and it’s ever-growing network of promoters, local talent, radio and community have pulled together a stellar run of shows featuring dance music legends, up and coming talent and some seriously talented local selectors spanning all genres of dance music and beyond. The Cause aims to open 7 days a week during the pandemic, with live hip hop, bands, poetry, storytelling, theatre, anti-racist discussions and panels throughout the week alongside Touche its regular drag queen cabaret show hosted by resident queer party Adonis. Headline comedy acts such as Ed Gamble, Mark Watson & Sara Pascoe also appear bi-weekly.