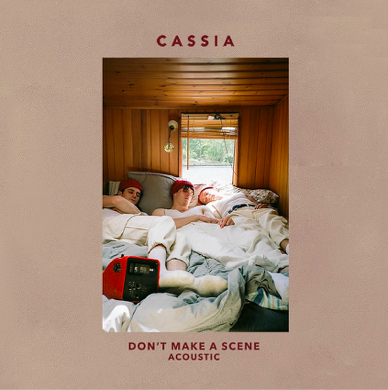 The momentum building around Cassia continued with the release of their current single ‘Don’t Make A Scene’. It premiered in the coveted Hottest Record slot on the Radio 1 Annie Mac Powerdown playlist show (covered by Clara Amfo) and earned its second major airplay courtesy of Jack Saunders that same evening, followed by continued Radio 1 plays and an Xposure playlist at Radio X.

Cassia shine fresh light on ‘Don’t Make A Scene’ as they share a new acoustic version of the song. While the original was utterly uplifting, this new take on the song heightens its laid-back, blissed out charm with jangly acoustic guitars and a subtle string accompaniment. It also puts a fresh focus on frontman Rob Ellis’s lyrics, which offer a timely reminder to follow your passions regardless of what other people might think. While Cassia’s music is uplifting and carefree, there is a stark difference between the face value of their music and its content under further inspection, presenting challenging themes in a totally unique way.

The acoustic version is accompanied by an official video. It finds the trio performing the song in their Casa de Cassia studio, which was named by a fan during one of their lockdown live sessions. Cassia recently founded the space as a headquarters where they could independently produce all of their recordings and creative activity.

“Going back to the UK after being in Berlin during lockdown gave me a whole new perspective on the song’s meaning,” says Ellis. “It reminded me that it’s such a British trait to not make a scene. There’s nothing better than a bit of British awkwardness. Really felt good to come home.”

The band are now hard at work on their eagerly anticipated second album, which will follow next year under a new deal with BMG. It follows their acclaimed debut album, ‘Replica’, which was released in 2019.

Cassia have toured relentlessly across the UK,US, Europe and South Africa. In fact, they’ve spent much of the last three years on the road. You’d routinely find them crammed in the van, touring from city-to-city and often spending 17 hours crossing the continent en route to the next gig. The reward was that they earned a following that ignited their streaming stats and wider media profile.

Their sold-out tours have included The Scala in London and a homecoming show at Manchester’s Ritz. Last year, the band played 35 packed festival dates including the Radio 1 Stage at the Reading and Leeds Festivals, All Points East, Truck Festival, Y Not, TRNSMT, Kendal Calling, Electric Picnic and SXSW. Those life-affirming shows resulted in them earning a nomination for Best Live Act at the AIM Awards alongside IDLES and DMA’S.

Cassia are set to make a long awaited return to the live arena next April, with the following dates coming ahead of wider touring as the year unfolds. Tickets are available from their official website.