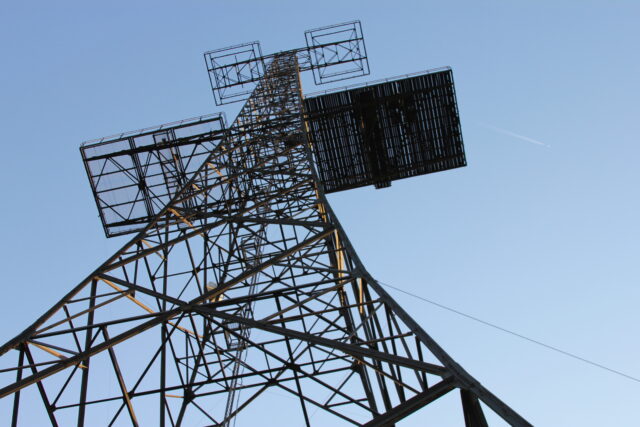 A Chain Home Tower at Great Baddow, Essex has been listed at Grade II by the Department for Digital, Culture, Media and Sport (DCMS) on the advice of Historic England to mark the 80th anniversary of the Battle of Britain on Battle of Britain Day (15 September). Although the Battle of Britain took place between July and October 1940, the date of 15 September is widely seen as when Britain’s RAF Fighter Command gained a decisive victory over the German Luftwaffe.

It is the only complete Chain Home transmitter tower surviving in the British Isles and one of only five Chain Home masts in existence. The tower was originally erected at RAF Canewdon in south-east Essex in 1937 and was relocated to Great Baddow in 1956.

Chain Home was the first early warning radar network in the world and the first military radar system to be fully operational. During the Second World War Chain Home Radio Direction Finding stations were decisive in providing early warning of Luftwaffe attacks. The towers at RAF Canewdon played a crucial role in the air defence of the country during the Battle of Britain 80 years ago, enabling fighter aircraft to swiftly intercept German forces. They were vital to the defence of London, including the tracking of destructive V1 flying bombs and V2 missiles later in the war.

The Marconi Company scientists and engineers at the Great Baddow laboratories designed the transmitter aerials for the Chain Home system. The Royal Air Force and Royal Navy were also based at Great Baddow carrying out radio technology research which, when used in aircraft, ships and mobile equipment, could be used to identify the source of opposition agents’ radio transmissions.

The tower’s relocation to the Marconi Company research site at Great Baddow in 1956 enabled it to play an important role in defence research and communications during the Cold War, particularly the development of the radio guidance system for the British ‘Blue Streak’ intercontinental ballistic missile.

Tony Calladine, Regional Director for Historic England in the East of England said: “This rare intact survivor is a testament to the men and women who developed the technology that led to the winning of the Battle of Britain 80 years ago. By protecting it, we are enabling this striking structure to continue to tell the story of technological advancement in the time of warfare.”