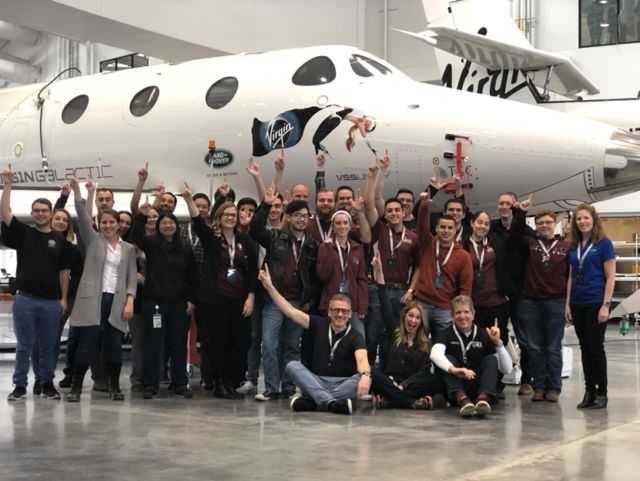 Through our Galactic Unite initiative, we’ve continued to award STEM scholarships to students pursuing degrees in aerospace during the COVID-19 pandemic.

Since March, Galactic Unite, together with Virgin Galactic Future Astronauts, has awarded $20,000 in scholarships, to nine students from San Diego State University and three from University of California, San Diego. The scholarship includes funding and access to a year-long mentoring package from staff at Virgin Galactic and The Spaceship Company.

Galactic Unite aims to drive positive change for young people by working to ensure future generations are equipped to apply the space perspective to Earth’s greatest challenges. As a part of that, we seek to inspire the next generation of engineers, pilots and rocket scientists to pursue careers within the fast-emerging commercial space industry.

These are unsettling times for all, but especially for many young students who are now having to learn from home while schools have been closed.

Joshua Elmer is a recipient of the Galactic Unite Jones’ Scholarship, funded by Future Astronaut, Gavin Jones, and is one of the twelve students to receive a scholarship during the Covid-19 pandemic: “This scholarship means I get to continue studying what I’m most passionate about, in the school I’m proud to be a part of, while also helping to take a significant burden off my family,” said Joshua. “The opportunity to work with a mentor and learn from someone who has already been where I’m going is also fantastic. I’m grateful for the doors this scholarship will open, and for the opportunities awaiting me and my family on the other side which might not have been possible otherwise.”

Galactic Unite was born out of a unique collaboration between Virgin Galactic, its community of Future Astronauts, and Sir Richard Branson’s Foundation, Virgin Unite. It launched a global scholarship program in 2012 focused on promoting diversity in STEM and space education. Our Future Astronauts have donated $1 million into Galactic Unite scholarships which we have distributed to 93 students across the world.

“I’ve been supporting Galactic Unite for over six years and have been impressed by the enthusiasm of the student scholars and the tremendous support they receive from Galactic Unite,” said, Scott Borden, Virgin Galactic Future Astronaut and founder of the Galactic Unite Borden Scholarship at San Diego State University.

Our mentors provide guidance to our Galactic Unite scholars across a wide range of areas and skills, including day to day college life. During these unprecedented times, our mentors are helping scholars navigate the challenges and preparing them for what lies ahead. Many of our scholars and mentors keep in touch even after graduating and going into the work force. Four of our former Galactic Unite scholarship recipients are now full-time employees across Virgin Galactic, The Spaceship Company and Virgin Orbit and some are now mentors themselves, offering the same support they received as part of the program.

Christian Engelbrecht was one of the first Galactic Unite Borden Scholarship recipients and after graduating he joined The Spaceship Company as a full-time member of staff. “The Galactic Unite scholarship was an invaluable stepping stone for my career; without it, I wouldn’t be living my dream job every day. The support I got progressed into an internship at The Spaceship Company, which has turned into a full-time career that I couldn’t be more fortunate to have”, said Christian. “I’ve played a vital role in Spaceship Unity’s progress towards spaceflight, and have recently started control room training. To be able to be in the control room during a human spaceflight mission is a life goal of mine.”

In the fall of 2019, we partnered with New Mexico State University (NMSU), the local university to Virgin Galactic’s commercial headquarters, The Gateway to Space at Spaceport America in New Mexico. Through this relationship, Galactic Unite launched a scholarship program that is currently supporting 11 students pursuing space-focused STEM majors.

Just before the COVID-19 outbreak in February, the NMSU scholars visited Spaceport America for an educational tour and mentoring session delivered by our team at Virgin Galactic.

“Getting to see VSS Unity in person gave me a rush of emotions. As an engineer, you read and study these complex systems, but seeing these beautiful aircraft up close helps visualize all the work that goes into such designs,” said, Luis Terrones, NMSU Student.