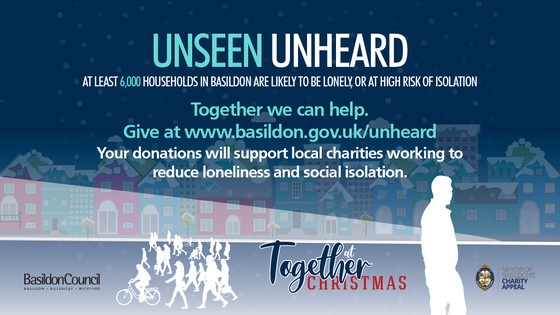 Basildon Council has launched a campaign in support of the Mayor of Basildon’s charitable trust to reduce loneliness and social isolation in the borough.

The “Unseen, Unheard” campaign will raise funds for the Mayor’s charitable trust whilst also raising awareness around the issues of social isolation and educating people on where they can receive or give help and support.

At least 6,000 households in Basildon each year are likely to be lonely or at high risk of isolation. Loneliness in Basildon amongst older people is higher than the national average – in the worst affected areas it is up to 30% higher.

This is an important issue to tackle as social isolation and loneliness can have major health impacts on those affected.

Research has shown that:

Social isolation is as damaging to health as smoking 15 cigarettes a day
Lonely people are more likely to suffer from dementia, heart disease and depression
Loneliness is likely to increase your risk of death by 29%
Additionally, social isolation affects people of all ages. It can be triggered by factors such as domestic violence, family crisis, health and disability, bereavement, unemployment or living alone.

The Mayor of Basildon, Cllr David Burton-Sampson, said: “This campaign is part of a larger strategy aimed at tackling the issues of social isolation and loneliness in our borough and ensuring that those affected are able to have access to the support they need.

“Last month we began the process of forming a “More in Common Basildon” committee with a goal of not only reducing loneliness but also increasing community cohesion. This month, The Unseen, Unheard campaign will further highlight the fact that social isolation can affect all sorts of people, of all ages, for various reasons.

“We can all do our part to help reduce the impact of social isolation by taking time to get together this Christmas, extending an invitation to people you think may be lonely at this time of year or offering a smile, a greeting and a mince pie to your neighbour.”

Monies raised from this campaign will help local charities to provide comfort and companionship, from activity centre services to help people to create new social connections, through to befriending and support for carers.