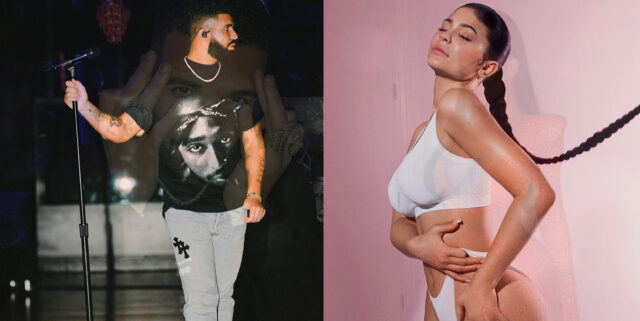 Kylie Jenner is at it again. According to the rumor mill, the celebrity beauty queen may be secretly pregnant once more. However, that’s not all – sources close to Kylie have also revealed that the business mogul has been seen in public outings with Drake. While Kylie is free to hangout with whoever she likes (especially after splitting with Travis Scott), fans are wondering whether their meetings are more than casual encounters.

One thing that makes fan theories seem more legitimate is the fact that both Drake and Kylie have recently split with their former partners. In fact, the timing of their breakups were shockingly close. Drake broke up with model and singer Makaila Terry recently, just in time for Kylie’s split from Travis Scott. While friends of the family say that Kylie and Travis are merely taking a break, one insider for PEOPLE magazine allegedly reported that Kyle & Drake are definitely involved romantically.

Unfortunately, it’s hard to tell for sure if the two are together. In the past, fan theories have allotted to little actual fact. For instance, Drake has been reported to date both teenager Bella Harris and teenage model Bella Hadid. However, on social media both women denied ever being in a relationship with the rapper. While they may be trying to protect Drake from the Internet’s collectively raised eyebrows, we have no choice but to believe them. Harris further denied rumors of going on a date in D.C. with Drake back in 2018, despite several publications reporting that Drake had rented out a restaurant for a romantic evening with the 18 year old model.

Apparently, Kris Jenner gets a little nervous about the idea of Caitlyn Jenner being on reality television. Although the two had a publicly amicable breakup, Kris has admitted that she is always very attentive of Caitlyn’s interviews and reactions. This is because Caitlyn enjoys the spotlight and might sometimes be a little … loose-lipped about family news. Recently, she might’ve slipped up big time.

In the third episode of reality show ‘I’m a Celebrity – Get Me Out of Here!’ Caitlyn said she was expecting 20 grandchildren in December. According to fans, this math doesn’t add up. As of now, Caitlyn only has 18 grandchildren, meaning that two are missing in her estimation. This could mean two things – either Caitlyn doesn’t know how many grandkids she has, which seems unlikely, or … someone is pregnant. If that’s the case, then the culprit could definitely be Kylie. However, since Kylie has only been seeing Drake for about a month, those casual encounters don’t fit the timeframe of a baby arriving in December.

As is, it’s hard to tell what’s what in the casual encounters of Kylie Jenner. She’s been up to an awful lot recently, what with selling 51% of her company to Coty and splitting up with her child’s father. She hasn’t always been very public about her personal life either – she only came clean about her pregnancy five days after Stormi’s birth. Not to mention, rumors are flying that Kylie had plastic surgery. That being said, it’s surprising news about Drake and Kylie has come out at all – maybe that’s a sign that it is serious. If so, then questions about this alleged pregnancy will only become more frequent … And we’ll be here to tell you all about it when they do.